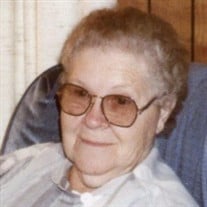 Adeline Douglass McQuown     March 10, 1925 to July 28, 2019 West Bend...  Services for Adeline McQuown, 94, of West Bend will be held Saturday, August 3, 2019, 2:00 PM at the Harris Funeral Home Chapel in West Bend, with burial to follow in the West Bend Cemetery.  Visitation will be from 1:00 PM until time of service at the funeral home prior to services. www.harrisfuneralservices.com Gladys "Adeline" Douglass McQuown was born March 10, 1925 on Earl Henderson's farm near Rolfe, Iowa.  She spent most of her school years at Rodman, Iowa and graduated from Rodman High School in 1943.  Adeline was a proud Rodman Cardinal and kept her school mates as lifelong pals.  The week after her graduation she married Ralph McQuown and they made their first home near Depew, Iowa.  Ralph and Adeline lived on a farm west of West Bend, Iowa for a short time, then moved to Curlew, Iowa where they lived until 1956. At that time the couple moved to West Bend where Adeline lived the rest of her life. Adeline is survived by four children:  Kurt(Diana) McQuown of Liscomb, IA; Diana Fredericksen of Omaha, NE; Kim Reynolds (Bob) of Elkhorn, NE; Luan McQuown (Jim Swartz) of Boyden, IA.  In addition to her children, she is survived by seven grandchildren and many loving great grandchildren and great great grandchildren.  Cousins Betty Robinson, Cheryl Shaw, Marion Lewis and Glenda Carpenter created a special bond with Adeline by making her their honorary "adopted" sister in the 1990's, a relationship that tickled Adeline.  Among those greeting Adeline in heaven are her husband Ralph and son Kenneth, her parents Bernell C. Douglass and Gladys (Carpenter) Douglass, and her brothers Rollyn Douglass and Bernell C. Douglass Jr. We, Adeline's children, would believe Mom would want you to remember her by giving this advice:  tell a joke, be kind to animals, feed the birds, go to reunions, always read the newspaper but read a National Enquirer on occasion, take a road trip, practice your spelling words, send Christmas cards, treasure your parents, love your spouse, ask for help when you need it, negotiate for the best price, don't gossip, find a good doctor, never quit learning, be silly, sing every day, take your vitamins, change your oil every 3,000 miles, give blood, have coffee with your neighbors, don't smoke, save rubber bands, repurpose worn out items, if you don't know it- look it up, read your Bible every day, and remember that Christ died for all our sins.

The family of Adeline McQuown created this Life Tributes page to make it easy to share your memories.

Send flowers to the McQuown family.