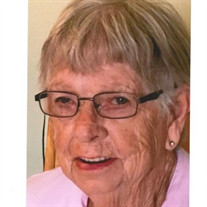 Alice “Joanne” Wycoff passed away on March 14, 2021 at the Hospice of the Heartland, Kossuth County Hospital. She was 89 years old. Memorial services will be held on Thursday, March 18 at 10:30 AM at First United Methodist Church in Algona. Services will be live streamed on the First United Methodist Church’s Facebook page. Burial will take place at Burt Township Cemetery. Visitation will be held on Wednesday from 5:00 PM until 7:00 PM at First United Methodist Church in Algona. Masks are required for all events. Joanne was born in Caseyville, Ill. to Preston and Violet (Hale) Franklin. She was the fifth daughter of seven girls and one boy. She was united in marriage to Howard Wycoff Jr. on January 16, 1954. From that union came 6 children, 3 boys and 3 girls. They made their home in Collinsville, Ill. Ottumwa, Breda, Lake Park, Storm Lake and Luverne, Iowa where Howard managed a cattle ranch. Joanne helped out on the ranch. She also loved to garden, cook, and spend time with her six children. Later they moved to Burt, Iowa where Joanne cooked for Shepherds Cottage. When Howard passed away, she moved to Algona, Iowa where she worked for HyVee at the Deli. She retired from the Deli and enjoyed going to the Senior Center, playing cards, going to Bingo, sorting corn for Pioneer and playing with her grandchildren and great grandchildren. She was preceded in death by her husband Howard, a daughter Cyndia DeMoss, a son-in-law Michael Bargman, a great granddaughter Ava Gonzales, six sisters, one brother and her parents. She is survived by her sister Nancy Clawsen, from Edwardsville, Ill. daughter Brenda (Deny) Gonzales from Emmetsburg, son Pat (Julie) Wycoff from Benson, AZ, son Scott Wycoff from Hot Springs, AR, daughter Nena Bargman from Algona, son Mike (Tiffany) Wycoff from Lakota, Iowa. Also surviving are ten grandchildren and nine great grandchildren. Lentz Funeral Home of Algona is assisting the family. Condolences may be left online at www.lentzfuneralhome.com.

Alice &#8220;Joanne&#8221; Wycoff passed away on March 14, 2021 at the Hospice of the Heartland, Kossuth County Hospital. She was 89 years old. Memorial services will be held on Thursday, March 18 at 10:30 AM at First United Methodist Church... View Obituary & Service Information

The family of Alice "Joanne" Wycoff created this Life Tributes page to make it easy to share your memories.

Send flowers to the Wycoff family.