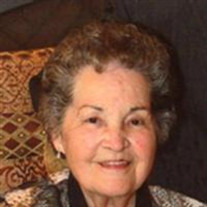 Obituary for Anna M. Garbarino On the afternoon of May 24, 2015, Anna Mae Garbarino passed away peacefully, surrounded by family at the West Bend Care Center in West Bend, IA. She was 87 years old. Anna was born to Charles and Molly(Mattox) Leathers on November 22, 1928 in Xenia, IL. She was the tenth in a family of thirteen children, consisting of four girls and nine boys. Anna worked at the Brown Shoe Company in Mattoon, IL until she met and fell in love with the late Paul Garbarino at 22 years of age. They were married on September 23, 1950 in Charleston, IL. The newly married couple traveled throughout the US, living in a trailer while Paul installed telephone systems for Strowger Automatic Electric (later GTE). During this time, two sons (Steven and Scott) were born. The family’s first home was in Fort Wayne, IN where they welcomed a daughter (Paula) named after her dad and a third son (Michael). The family then moved to Illinois, and a fourth son (John) was added. Paul and Anna became active members of the Grace Lutheran Church there in Streamwood, IL in 1960. Anna enjoyed serving in its ladies guild. In 1987, Anna retired from Motorola after 21 years of faithful employment. She then worked for Kit Moss handling their food sampling for area stores and also as an aide at Fox Meadow Schools in Elgin, IL. While living in Illinois, Anna enjoyed the home she and Paul built and especially loved having it full of kids, grandkids, and friends. Anna was happiest with a table of guests to feed and counters of extra food laid out, in case anyone got hungry. She also loved working in her yard and caring for her roses. Paul and Anna moved to West Bend, IA in 2005. They became members of the Peace Lutheran Church, and Anna loved spending time quilting with her friends from its ladies guild. She always looked forward to visits from her family and friends. Anna was preceded in death by her husband, her parents, and twelve siblings. Anna is survived by: her children Steven (Diane) of Owings Mills, MD; Scott (Marilyn) of Kenosha, WI; Paula (John) Schmidt of West Bend, IA; Michael (Susan) of Huntley, IL; and John (Denise) of St. Charles, IL. She is also survived by her ten grandchildren and fourteen great-grandchildren. A viewing will be held on Saturday, May 30, 2015 from 8-10:00am at the Peace Lutheran Church in West Bend with the funeral following at 10:30am. Burial will be in the West Bend Cemetery. Harris Funeral Home will be handling the arrangements and care of family. The family respectfully request memorials in lieu of flowers.www.harrisfuneralservices.com

Obituary for Anna M. Garbarino On the afternoon of May 24, 2015, Anna Mae Garbarino passed away peacefully, surrounded by family at the West Bend Care Center in West Bend, IA. She was 87 years old. Anna was born to Charles and Molly(Mattox)... View Obituary & Service Information

The family of Anna M. Garbarino created this Life Tributes page to make it easy to share your memories.

Send flowers to the Garbarino family.