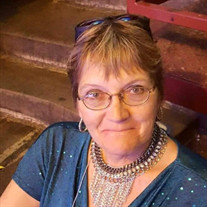 Anna Olsen, age 63 of Algona, passed away Tuesday, February 9, 2021 at her home. Graveside services will be held on Saturday, October 30, 2021 at 10:30 AM at Lone Rock Cemetery in Lone Rock. Funeral services were be held on Saturday, February 13, 2021 at 10:30 AM at Grace Church in Algona. Services were livestreamed on Lentz Funeral Home's Facebook page https://www.facebook.com/Lentz-Funeral-Home-122511234501273. Visitation was held on Saturday from 9:00 AM until the time of the service at 10:30 AM. Anna Esther Olsen was born on July 31, 1957 in Estherville, Iowa to Ralph Leroy and Caroline Emma (Rath) Gilbertson. Anna graduated from North Kossuth High School in 1975. She furthered her education in 2001 and attended Iowa Lake Community College and earned an Associates of Science degree. On July 1, 1978, Anna was united in marriage to Terry Lee Olsen at the United Methodist Church in Algona. Anna worked at a variety of restaurants such as Hickory House, Chrome Country Inn, Happy Chef and McDonald’s. She worked retail for Hutzell’s and K-Mart and was the Co-Owner of T&A Northside Repair. Most recently she was employed at Aluma KLM in Bancroft as a welder for the last 13 years. Anna attended Grace Church, had been a member of VFW and Silver Crystal CB Club. She enjoyed bowling with her bowling league. Left to cherish Anna’s memory are her husband, Terry of 42 years; children, Chantel (James) Teeter of Algona, Dawn (Kris) Badker of Cherokee and Daniel (Cassandra) Olsen of Algona; five grandchildren, Branden Garrett, Mackenzie Teeter, Austin Badker, Allyssa Badker and Carley Olsen; mother, Caroline Gilbertson of Algona; sisters, Etta (Jim) Pergande of Algona and Cara (Randy) Lewis of Emmetsburg and numerous other family members and friends. Anna was preceded in death by her father, Ralph Gilbertson. In lieu of flowers, donations can be made in Anna’s honor to the Kossuth County Cancer Support Foundation or Hospice of the Heartland.

The family of Anna Olsen created this Life Tributes page to make it easy to share your memories.

Send flowers to the Olsen family.