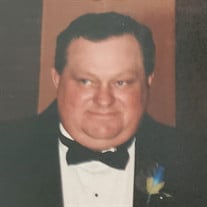 Arnold Kuper, age 70 of Algona, passed away Thursday, April 29, 2021 at the Kossuth Regional Health Center in Algona. Memorial services will be held on Friday, May 7, 2021 at 2:00 PM at Lentz Funeral Home in Algona. Services will be live streamed on Lentz Funeral Home's Facebook page https://www.facebook.com/Lentz-Funeral-Home-122511234501273 Burial will take place at East Lawn Cemetery in Algona with Military Rites conducted by the Iowa Army National Guard and the Algona VFW and American Legion. Visitation will be held from 1:00 PM until the time of the service on Friday at Lentz Funeral Home in Algona. The family requests that casual attire be worn for Arnie's services. Arnold Gerald Kuper, the son of Harry and Anna (Janssen) Kuper, was born in Hampton, Iowa on July 17, 1950. He graduated in 1970 from Lakota High School. Arnie enlisted in the United States Army and served in Germany. He was a Tank Commander and guarded the Berlin Wall. On March 1, 1971 Arnie was united in marriage with Lucinda “Cindy” Rose Richardson in Elmore, MN. Arnie was a Police Officer for Swea City and Bancroft from 1981 until 1995. He was a member of the Bancroft American Legion and served on the Fire Department and Ambulance Crew for Swea City and Bancroft. Arnie loved to go fishing, drive truck, drink coffee with his coffee groups and most of all he loved his friends and family; especially his grandchildren. Left to cherish Arnie’s memory are his children, Damon Kuper of Burt and Teri (Dan) Hanselman of Algona; four grandchildren, Taylor, William, Alexis and Abigail; a great grandchild, Addalyn Kuper; brothers, Andy (Patricia) Kuper Sr. of Algona and James (Ruth) Kuper of Ft. Morgan, CO and sisters, Betty (Raymond) Niswender of Ft. Collins, CO and Mary (Don) Cox of Divide, Co. He was preceded in death by his parents; wife, Cindy and brother, Larry Kuper. Lentz Funeral Home of Algona is serving the family exclusive provider of Veterans and Family Memorial Care. Condolences may be left at www.lentzfuneralhome.com

Arnold Kuper, age 70 of Algona, passed away Thursday, April 29, 2021 at the Kossuth Regional Health Center in Algona. Memorial services will be held on Friday, May 7, 2021 at 2:00 PM at Lentz Funeral Home in Algona. Services will be live... View Obituary & Service Information

The family of Arnold Kuper created this Life Tributes page to make it easy to share your memories.

Send flowers to the Kuper family.