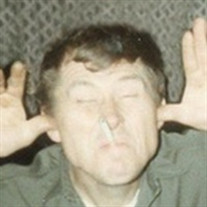 Ottosen...Arthur "Artie" Lovig, 78 of Marathon, formerly of Ottosen died Tuesday March 27, 2018 at his daughters home in Storm Lake.  Visitation will be held from 9:30-11:30 Saturday, March 31, at the Harris Funeral Home in West Bend with burial to follow at Union Cemetery, Ottosen.  Art Lovig, the son of Arthur E. and Mary Welter Lovig was born July 3, 1939 in Ottosen, IA where he was raised and educated graduated from Twin Rivers High School in 1958. He then entered the United States Marine Corps where he served for 4 years.  On April 22, 1967 he was united in marriage with Violet Mumford in Laurens, Iowa.  The couple lived in various locations where including Pocahontas, Laurens, Waterloo Waverly, Sioux Rapids and Spencer where Artie worked as a machinist.   He retired when he reached 62 years of age.  Art enjoyed fishing, hunting, ice skating, swimming and camping.  He also learned gymnastics, acrobatics and baton twirling.  As he got older he was interested in cars and built a stock car with his high school friends.  He also enjoyed playing cribbage with his Dad, when he would visit from Alaska.  Survivors include his wife Violet of Marathon, IA, children, Brenda Lovig of Storm Lake, IA, Andrew Lovig of Marathon, IA and Mary Peck of Albert City, IA, 7 grandchildren and 1 great grandchild, and brother Charles (Pat) of West Branch, IA.  He was preceded in death by his parents, aunts, uncles and cousins as well as his last living aunt who died  on March 27th as well.  www.harrisfuneralservices.com

Ottosen...Arthur "Artie" Lovig, 78 of Marathon, formerly of Ottosen died Tuesday March 27, 2018 at his daughters home in Storm Lake.  Visitation will be held from 9:30-11:30 Saturday, March 31, at the Harris Funeral Home in West Bend with burial... View Obituary & Service Information

The family of Arthur M Lovig created this Life Tributes page to make it easy to share your memories.

Send flowers to the Lovig family.