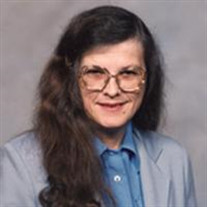 Avis H. Lakin, 74 of Gilmore City, died Thursday, March 26,2015 at Mercy Medical Center in Mason City. Services will be held Monday, March 30, 11:00 AM at the Harris Funeral Home Chapel, Gilmore City with burial to follow at Marble Valley Cemetery. Visitation is from 2-4 PM Sunday at the funeral home. Avis H. Strickler, the daughter of Helen Hegarty and Kenneth Strickler was born July 4, 1940 in Algona, Iowa, where she was raised and educated, graduating from the Algona High School. She then attended La James College in Mason City. Avis was a dispatcher for the Algona Police Department for 25 years. On December 18, 1982 she was united in marriage with Harold "Butch" Lakin in Algona. The couple lived in Pocahontas for a while before moving to Gilmore City in the early 1990's. Survivors include her husband Butch of Gilmore City, Iowa, children Lisa(Jeff) Twait of Algona, IA, Gary Stattelman of Fort Dodge, IA, Eric (Sue) Lakin of Fort Dodge, IA and Chad Lakin of Humboldt, IA, 10 grandchildren, and her sister Irene Rickie of Algona, IA. Avis loved attending flea markets and visiting with anyone she might run into. She never met a stranger. Preceding Avis in death were her parents and her brother Dave Strickler. www.harrisfuneralservices.com

The family of Avis H. Lakin created this Life Tributes page to make it easy to share your memories.

Send flowers to the Lakin family.