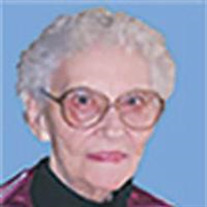 Services for Beatrice Hudson, 96 of Rolfe will be held Monday, 10:00 AM at Trinity Lutheran Church in Mallard. Visitation is from 2-4 PM Sunday at the church. Harris Funeral Home, Mallard is in charge of arrangements. Beatrice Christina Truelson Hudson was born in Havelock on Nov. 26, 1917 the daughter of Andrew and Rosa (Hacker) Truelson . She quit school in 1934 to help her mother raise her three nephews and one niece following the death of their mother. She also was a nanny for a few young mothers. She married Raymond Hudson on Jan. 1, 1939, in the Lutheran Parsonage in Mallard. They had two children - Stella Mahoney and Duane Hudson of rural Rolfe. She was a farmer's wife and raised a lot of chickens each year, selling them to many area families. She also dressed many chickens for Joyce's grocery store in Emmetsburg. She and Raymond farmed northwest of Emmetsburg for 15 years, then moved to rural Havelock and farmed the Truelson farm there for 18 years, and in 1978 retired to the Hudson farm north of Rolfe. They enjoyed playing cards with neighbors. Bea made several hundred grandma and grandpa dolls out of Ivory bottles. She sewed the clothes for these dolls and sold them at the Chik Tok in Emmetsburg for many years. She loved baking and was famous for her CHOCOLATE CHIP COOKIES. She and Raymond entered Lakeside Lutheran Home in March of 2007, where Raymond passed away in July of that year. She continued to live there until her death. Ray and Bea both loved their grandchildren. The grandchildren spent many days at the farm walking beans and playing cards. They always had a lot of fun with their grandchildren there where Bea made mud puddles for them to play in. She would wash up their clothes before sending them back home. They loved their great-grandchildren as well, even taught them to play cards (golf), a fun game for the younger ones to be able to play. They also played a lot of aggravation,and the kids always thought it was fun to send their opponents back to the beginning and a lot of laughs were had by all. She is survived by her two children, 7 grandchildren - Denise Mahoney of Lake Park, Ia. Debi Ylitalo of Chaska, MN. Denita Pirie of Milford, IA., Rick Mahoney of Atlantic, IA., Wendi Hudson of Milford, Ia., Pam Wolff of Emmetsburg, and Nathan Hudson of Emmetsburg. Also survived by 15 great grandchildren. One sister, Clara Mae Smith of Escondido, CA. and sister-in-law, Pauline Truelson of Grove City, MN. She was preceded in death by her husband, Raymond Hudson, son-in-law Richard Mahoney, Sisters - Luella Brown, LaVon Swecker, Bernice Plummer (her twin), Eleanor Dailey, brothers - Raymond, Andy and Henry (Hank) Truelson. www.harrisfuneralservices.com

Services for Beatrice Hudson, 96 of Rolfe will be held Monday, 10:00 AM at Trinity Lutheran Church in Mallard. Visitation is from 2-4 PM Sunday at the church. Harris Funeral Home, Mallard is in charge of arrangements. Beatrice Christina Truelson... View Obituary & Service Information

The family of Beatrice Hudson created this Life Tributes page to make it easy to share your memories.

Services for Beatrice Hudson, 96 of Rolfe will be held Monday,...

Send flowers to the Hudson family.