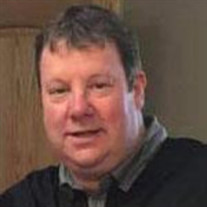 Bert Glossen, age 50 of Dakota City, passed away Wednesday, March 24, 2021 at the Paula Baber Hospice House in Fort Dodge. Public Visitation will be held on Sunday, March 28, 2021 from 2:00 PM until 4:00 PM at Zion Lutheran Church in Humboldt. Private Family Memorial Services will be held on Sunday at 4:00 PM at Zion Lutheran Church in Humboldt. Services will be live streamed on Lentz Funeral Home's Facebook page https://www.facebook.com/Lentz-Funeral-Home-122511234501273. Burial will take place at a later date. Masks are required. Bert was under the care of hospice at home for one month until he was admitted to the Paula Barber Hospice Home on March 24, 2021. His family would like to thank all of the wonderful hospice staff that made it possible for Bert to receive the best care possible while being surrounded by his loving family. Bert Evan Glossen, the son of Merle and Edith (Hanselman) Glossen, was born on February 25, 1971 in Newport, Rhode Island. He graduated from Humboldt High School in 1989. Bert continued his education at the University of Northern Iowa and earned his Bachelor’s in Accounting in 1993. On July 18, 2013, Bert was united in marriage to Tracey (Lehman) Ruberg in Dakota City. Bert was employed at Chantlands-MHS Company for 30 years. Bert loved to cheer on the Iowa Hawkeyes and the Chicago Bears. In his earlier years, Bert enjoyed golfing and was a member of the country club in Humboldt. He and Tracey loved to travel; Las Vegas and Daytona were some of their favorite places to vacation. Bert became an animal lover starting with their first dog Jeezy then dog Axl and cat Jinxy. It would not be uncommon to get a video text of his pets doing something funny or even a random joke here and there. During the summer months, you could find Bert sitting out in his garage enjoying the nice weather and time with family and friends. He was an excellent cook and a master at grilling. He took great pride in the life he had built for himself surrounded by all those he loved. Left to cherish Bert’s memory are his wife of 7 years, Tracey of Dakota City; step-children, Amanda (Nathan) Fischer of Dakota City, Shawn (Megan) Ruberg of Humboldt and Dustin Ruberg of Dakota City; step-grandchildren, Carter, Arianna, and Kayde Fischer and Sophie and Grayson Ruberg; mother, Edith Glossen of Humboldt; sister, Diane Vodraska of Dakota City; niece, Jacey Vodraska of Des Moines; nephew, Shayden Vodraska of Dakota City and mother-in-law Barbara Lehman of Badger. He was preceded in death by his grandparents; father, Merle and father-in-law, Clarence Lehman.

The family of Bert Glossen created this Life Tributes page to make it easy to share your memories.

Send flowers to the Glossen family.