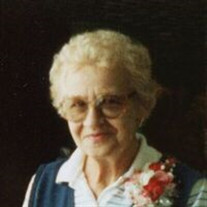 Click here to view/print Funeral Folder Betty L. Meyer 95 of Gilmore City died Sunday June 7, 2020 at Humboldt Care Center South. Betty is survived by a son Larry (Fritz) Meyer of Fort Dodge, formerly of Gilmore City, and a daughter Sherry Lowrey of Gilmore City. Other survivors include a granddaughter Zienna Blackwell-Rodriquez of Lodi, CA, a grandson Corey Meyer of Humboldt, great-grandchildren, Elizabeth Meyer of Columbia, SC, Derek Ivey of Frederick, MD, Ethan and Rosalynn Meyer of Humboldt, great great grandchildren Houston and Vivian Ivey of Bethesda, MD a brother Kenneth Hasenbank of Berwick, ME and many nieces and nephews. She was preceded in death by her parents, her husband Lawrence, daughter-in-law Priscilla Meyer, son-in-law Ronald Lowrey, brothers Arthur and Wayne Hasenbank and Charles (Buck) Dutton and sisters Gloria Ricklefs, Shirley Thornsbrough and Sandra Reagan. Betty was born to parents Arthur and Selma (Senne) Hasenbank on November 21, 1924. in Clarence, IA. During her younger years she lived in a number of cities in Kansas and in the Pocahontas area. On June 28, 1942 she was united in marriage to Lawrence Meyer at South Sioux City, NE. She and Lawrence made their home farming near Pocahontas and later purchased a farm near Gilmore City and lived and worked there for many years. Betty loved ANY kind of sewing or needle work and crafted many beautiful creations. She also enjoyed making quilts with her women’s church group and did so for many years. Flowers were one of her favorite things and on the farm the yard was full of all kinds of beauties. Even after moving to her apartment she continued to fill pots with flowers that all could enjoy. After Lawrence’s passing she decided she needed something to do so went to work at Casey’s General Store in Gilmore City at age 65 and worked there for 14 years before finally retiring in 2003. Betty was very involved in her church, First Lutheran in Gilmore City, and served in many different ways.  She loved her family deeply and was always there to help in any way she could.  She will be greatly missed.  Graveside services will be held Friday June 12, 11:00 AM at Marble Valley Cemetery, Gilmore City.  A public visitation will take place from 10-11 AM Friday at the Harris Funeral Home in Gilmore City. www.harrisfuneralservices.com

The family of Betty L. Meyer created this Life Tributes page to make it easy to share your memories.