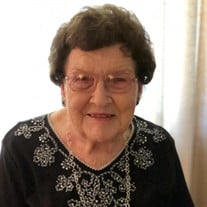 Betty Stein, age 92, of Gilmore City passed away on April 11, 2022 at Humboldt County Memorial Hospital in Humboldt. Mass of the Christian Burial will be 11:00 AM on Tuesday at St. Mary’s Catholic Church in Humboldt. Burial will take place in St. John’s Catholic Cemetery in Gilmore City. Visitation will be 4:00 – 7:00 PM Monday at Lentz Funeral Home in Gilmore City, with a 7:00 PM Scripture Service. Betty Margaret Huseby, the daughter of Nord and Rena (Kruse) Huseby, was born on January 13, 1930 in Sioux Rapids, Iowa. She graduated from Havelock High School in 1947. Betty received her teacher’s certificate from Buena Vista College in 1949. On August 5, 1950 Betty was united in marriage with Curt Stein at St. John’s Catholic Church in Gilmore City. Betty worked as a kindergarten teacher for 2 years and then stayed home to raise her children. She later worked as the Postmaster in Pioneer. Betty had been a member of the St. John’s Rosary Sodality and the Model A Car Club. She enjoyed socializing at the Senior Citizens Center in Gilmore City, gardening, flowers, painting ceramics and most of all spending time with her family. Betty and Curt loved going to swap meets, antique stores and attending the Albert City Threshermens Show every year. Left to cherish Betty’s memory are her children, Ron (Esther) Stein of Woolstock, Rick (Lori) Stein of Humboldt, Terry Stein of Gilmore City, Suzanne Jergens of Odebolt and Cynthia (Dave) Vote of Gilmore City; daughter-in-law, Vicki Stein of Wellman; 17 grandchildren; 34 great grandchildren; and 4 great great grandchildren. She was preceded in death by her parents; husband of 63 years, Curt; sons, Paul, Doug and Jim Stein; a grandson, Sean; and a brother, Marion “Sonny” Huseby.

Betty Stein, age 92, of Gilmore City passed away on April 11, 2022 at Humboldt County Memorial Hospital in Humboldt. Mass of the Christian Burial will be 11:00 AM on Tuesday at St. Mary&#8217;s Catholic Church in Humboldt. Burial will... View Obituary & Service Information

The family of Betty Stein created this Life Tributes page to make it easy to share your memories.

Send flowers to the Stein family.