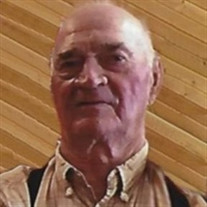 Bob Besch, 86, of Rodman, Iowa, died June 14, 2019 at West Bend Health & Rehab, West Bend, Iowa.  A funeral mass will be held 10:30 AM Monday, June 17, 2019 at Sts. Peter & Paul's Catholic Church in West Bend.  Burial will follow at the West Bend Cemetery.  Vistitation will be 3-6 PM Sunday, June 16 at the church with a prayer service at 6 PM. Robert Frank, son of Isadore and Mary Kissner Besch, was born November 30, 1932 in rural Whittemore, Iowa.  Bob attended country school there, then Sts. Peter & Paul's Catholic School in West Bend.  He attended West Bend High School until he enlisted in the Air Force at the age of 17.  He was stationed at Thule, Greenland and Las Vegas, Nevada.  Bob remained in the service for eight years operating heavy equipment until his honorable discharge.  December 26, 1956, Bob was united in marriage with Ruby Zaugg at Sts. Peter & Paul's Catholic Church in West Bend.  The couple first lived in West Bend where Bob worked at the West Bend Creamery.  In 1965 Bob and Ruby moved to Rodman where they raised their family and spent the remainder of their married lives.  Bob built a grocery store in Rodman and operated it until 1976.  At that time he went to work for Bituminous in Algona, Iowa until his retirement in 1995.  Bob was a member of Sts. Peter & Paul's Catholic Church in West Bend and the American Legion.  He and his brother Ted spent much time hunting and fishing together. Survivors include Bob's wife Ruby of West Bend, IA, daughter Marcia (Tom) Sadler of Aurora, MO, son Mark Besch (Crystal Metzger) of Rodman, IA, and grandchildren Jonathon (Chrissy) Sadler, Caleb Metzger and Makaya Metzger.  Bob was preceded in death by his parents and brothers Orville, Jerry, and Ted Besch.

The family of Bob Besch created this Life Tributes page to make it easy to share your memories.

Send flowers to the Besch family.