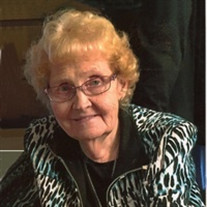 In Loving Memory Bonnie R. Peters January 12, 1943-May 11, 2018 Gilmore City, Iowa   Bonnie R Peters, age 86, of Humboldt, Iowa, formerly of Gilmore City, Iowa, passed away peacefully, surrounded by her family, on May 11th at the North Care Center in Humboldt. Services will be held Tuesday, May 15, 10:30 AM at First Lutheran Church Gilmore City with burial to follow in Marble Valley Cemetery, Gilmore City.  Visitation is from 4-7 Monday at the Harris Funeral Home in Gilmore City.    Bonnie Rosella Will was born January 12, 1932, on a farm outside Boxholm, Iowa, to Clarence and Edla (Olson) Will. Bonnie was one of 6 children and was baptized and confirmed at Trinity Lutheran Church in Boxholm. She attended school at Grand Community, graduating in 1949. She loved singing, playing the piano, and sports. She won an award at the Iowa state free throw competition and sang in many small group choirs. After graduation Bonnie moved to Ft. Dodge and worked as a receptionist for the Lutheran Hospital. She was introduced to the love of her life, Dean Peters, at a dance at the Ballroom, in Ft. Dodge. Bonnie and Dean were married on February 28, 1954 at Trinity Lutheran Church. They were blessed with 4 children, Pamela, Cheryl, Janet, and James. Bonnie and Dean farmed outside of Gilmore City, Iowa until their retirement in 1988, when they moved into Gilmore City.   Bonnie loved the farm and was a hardworking wife and mother. She could often be found in the garden, canning, cooking, baking, and being the town’s Egg Lady. She was very active in her church, singing in the choir, teaching Sunday school, leading bible study, and organizing church circle activities, including helping with funeral dinners and services. Bonnie was the church historian for 23 years. She was also a historian in her personal life, recording the day-to-day goings on in the form of a daybook, just as her father did. She loved capturing memories through pictures and creating scrapbooks for her family, friends, and every organization she belonged to over the years. Her family cherishes the thousands of pictures and wonderful scrapbooks she created for them.   Bonnie was a member of the Harnett Johnson Auxiliary and Past Presidents Organization and served in every office, many times. She enjoyed volunteering her time to organize the Gilmore City Memorial Day events and spent countless hours cooking and serving ebelskivers at the Annual Ebelskiver breakfast fundraiser for the American Legion. She also loved sending cards and caregiving. Over the years, she sent thousands of cards for every occasion and made just as many visits to her friends in need.   Bonnie’s greatest love was her family and all the time they spent together. Those left to cherish her memory include her children, Pam (Don) McClannahan of Storm Lake, Cheryl Peters of Dakota City, Janet Schoeberlein of Waukee, and Jim (Angie) Peters of Gilmore City, as well as 11 grandchildren and 7 great grandchildren. She is also survived by her loving sister, Betty (Dick) Martin of Boone, sister in-law Jeanne Hutchinson of Gilmore City, numerous nieces and nephews, and many beloved friends.   She was preceded in death by her parents, parents in law, husband Dean, son-in law Dave Schoeberlein, sister Mavis Hull, brothers Don Will, Paul Will, Chuck Will, sisters in law Vivian Will, Edna Will, Diane Will, and brothers in law Larry Hull, Daryl Hutchinson, and Leo Peters.  May God bless her wonderful life and indelible memory.

The family of Bonnie R. Peters created this Life Tributes page to make it easy to share your memories.

Send flowers to the Peters family.