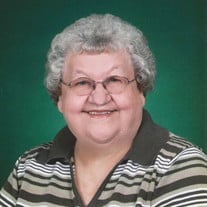 Carol Jean Jergens passed away peacefully on December 16, 2021 at the Prairie Creek Assisted Living in West Bend, Iowa. Visitation for Carol will be held at the Peace Lutheran Church, West Bend, Iowa, on Sunday, December 19, from 4-7 PM. Funeral services will be Monday, December 20, also at the church in West Bend, at 10:30 AM. Burial will take place at the West Bend Cemetery in West Bend. Lentz Funeral Home of West Bend is assisting the family. www.lentzfuneralhome.com. She was born on a farm southwest of West Bend to John and Rosamond (Rosie Buzzell) Otto on Mother’s Day, May 11, 1941. She attended school in West Bend and graduated in 1959. She married Lewis Conrad Jergens on May 25, 1959. The couple honeymooned in New York where they saw Niagara Falls and visited Lewis’ older sister, Agnes, in Detroit, Michigan. Two children were born to this union: Cindy Lou and Gary Lee. Carol drove a school bus for the West Bend-Mallard Community School system for 47 years. Routes included driving kindergarten students, a regular route, special education route to Emmetsburg, sporting events, and her favorite, taking the drill team to state competition. She drove several trips out of state to the Black Hills, Branson, and the Chanhassen Dinner Theater. She sold Avon products for over 30 years to many in the West Bend area. Carol loved a good 500 card game and baking a peach pie for dessert. Carol moved to Prairie Creek Assisted Living in January 2018. She enjoyed Saturday morning coffee with friends, Bingo, solving Word Find puzzles, and her ipad. She is preceded in death by her parents, John and Rosie, an older sister, Irene Maassen, her husband, Lewis, in 1993, and her son, Gary, in 2016. She is survived by her daughter Cindy (Kevin) Zimple of Traer, two step grandchildren, Trista and Zander Zimple of Traer, sisters, Janice Michelson of Hardy, and Esther (Edgar) Meyer of Algona, plus many nieces and nephews.

The family of Carol Jergens created this Life Tributes page to make it easy to share your memories.

Send flowers to the Jergens family.