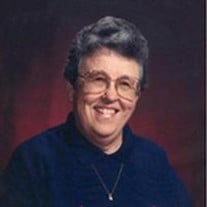 Carol Miller, 79 of West Bend died Tuesday April 16, 2013 at Iowa Methodist Medical Center in Des Moines. Services will be held Saturday, April 20, 10:30 AM at Sts. Peter and Paul's Catholic Church, West Bend with burial to follow in the West Bend Cemetery. Visitation is from 4-7 PM Friday at the church where a parish vigil service will be held at 6:30 PM. Harris Funeral Home of West Bend is in charge of arrangements. Carol Miller, the daughter of Ray and Hilda (Weber) Miller was born July 13, 1933, in West Bend. She attended Sts. Peter and Paul's Catholic School through the 8th grade and graduated from the West Bend High School in 1951. She was employed as a cashier at the Iowa State Bank in West Bend for 45 years, retiring in 1995. Her interests included bowling, golfing, traveling and she also took great pride in keeping her large yard immaculate. She was a lifelong St. Louis Cardinal and Iowa Hawkeye fan. From its inception, Carol was the treasurer of the West Bend Golf and Country Club, serving from 1978-1990. She served on Sts. Peter and Paul's Finance Board from 1987-1994 and was a church director from 1994-1998. She also served on the Grotto of Redemption Board from 2001-2013. In short, Carol was a loyal and avid supporter of everything that had to do with West Bend. Survivors include her sisters Jeanette Schumacher of Mallard, IA and Mary Duffy of Adel, IA, niece and nephews, Kay (Dave) Frerk, Joe (Pam) Schumacher, Pat (Patricia) Schumacher, Tim (Cynde) Schumacher, and Kevin Duffy, 10 great nieces and nephews and 11 great-great nieces and nephews. Carol was preceded in death by her parents, brothers-in-law Gene Schumacher and Tom Duffy, nephew Mike Schumacher and great nephew David Kemnitz.

The family of Carol Miller created this Life Tributes page to make it easy to share your memories.