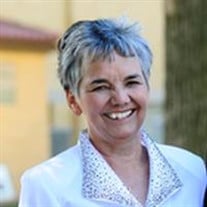 Charlene K. Miller, 73, of West Bend, died on October 29, 2015 at the Paula J. Baber Hospice Home in Fort Dodge. Services will be held 10:30 AM Monday November 2, 2015 at Sts. Peter and Paul Catholic Church in West Bend, with burial to follow in the West Bend Cemetery. Visitation will be from 2-6 PM Sunday at the church where a rosary will be recited at 1:30 PM and a Parish Vigil Service held at 5:30 PM. Harris Funeral Home of West Bend is in charge of arrangements. Charlene Kathryn Miller was born on June 30, 1942 in St. Joseph, the daughter of Eugene and Emma Becker Thul. She attended elementary and most of high school in St. Joe. She graduated from Bishop Garrigan High School as part of the first ever graduating class in 1960. Charlene was united in marriage to Lannie Miller on December 28, 1961 at St. Joseph’s Catholic Church in St. Joe. They lived and farmed near West Bend. In 1980, Charlene started working at Lamperts which eventually became Community Lumber, a position she held for 35 years. Using the knowledge she had gained from those years spent around contractors, construction crews and customers, Charlene was eventually able to build and move into her own dream house in December 2005. Charlene had many passions in life. She joined a bowling league in 1965 at Lou’s Lanes. After Lou’s closed, she continued to bowl in leagues in Algona and Humboldt up until the time of her death. When West Bend built a golf course she took up the sport so she could support the venture and have another hobby to share with others. Charlene loved to travel and would say “Yes!” to anyone who asked her to go somewhere with them. These adventures took her to Italy, Alaska, Hawaii, New York and almost every other state in the country. Charlene was an avid seamstress. She sewed clothes for her daughters when they were younger. More recently, she enjoyed making dolls, blankets, bags and other items for her children and grandchildren. She was always looking for some unique, new project to dive into. Those left to honor her memory include her husband of 53 years, Lannie of West Bend; eight children, Vicki Miller of Mt. Airy, GA, Jeff (Rhonda) Miller of Des Moines, Kris (Randy)Adams of Las Vegas, NV, Tina (Craig) Banwart of Algona, Rusty (Rachel) Miller of Clermont, GA, Amy (Bob) Wasson of Waukon, Andi (Adam)Sadler of West Bend and Dixie (Ross) McConnell of Indianola; 22 grandchildren, Abby, Jack, and Anthony Miller, Amanda (Brennan) Kollasch, Casey and Sterling Sprau, Danielle and Andrew Adams, Chelsea (Jordan) Laubenthal, Mackenzie and Cole Banwart, Savannah and Jacob Miller, Regan, Brooke and Mason Wasson, Charli, Ryen, Memphis and Axl Sadler, and Cooper and Baby McConnell. Charlene is also survived by eleven siblings, Donna (Ray) Forsythe of Fort Dodge, Barb Forsythe of Chandler, AZ, Jean Pittsley of Libby, MT, Virginia (Joe) Kulisek of Westchester, IL, Richard (Sheryl) Thul of Boone, Emily Bendickson of Farnhamville, Millie Crawford of Fort Dodge, Irene Cameron of Des Moines, Peggy (Ron) Kovacs of Glen Campbell, PA, Don (Linda) Thul of West Bend, and Carla (Frank) Montag of West Bend. She was proceeded in death by her parents; one brother, David Thul; two sisters, Mary Lu Thul and Fran Johnston; brothers-in-law Dale Pittsley, Gary Bendickson, Bill Crawford and Richard Cameron.

The family of Charlene K Miller created this Life Tributes page to make it easy to share your memories.