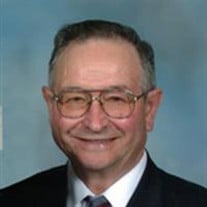 DO TO WEATHER CONDITIONS THE TIMES FOR MR. SCHMIDTS SERVICES HAVE BEEN CHANGED.West Bend...Charles "Chuck" E. Schmidt, 78 of West Bend died Tuesday, December 22, 2015 in West Bend,IA. Services will be held Tuesday, December 29, 12 Noon, at Saints Peter and Paul's Catholic Church, West Bend. Visitation is from 9-12 Noon at the church with a lunch to follow immediately in the church hall. Harris Funeral Home of West Bend is in charge of arrangements. Charles 'Chuck' Earnest Schmidt, the son of Earnest and Ida (Banwart) Schmidt was born January 1, 1937 on the family farm in Ottosen, IA. He received his education at a country school north of Ottosen until the third grade, then finished his education at the West Bend Community School. On January 8, 1957 he was united in marriage with Carol Laubenthal at Sts. Peter and Paul Catholic Church in West Bend. The couple lived on a farm near Ottosen, where they had a dairy and crop farm and raised seven children. Due to health reasons, they moved into West Bend in 1987. Chuck retired from farming and worked for West Bend Ford until 2005. Chuck had a great passion for the farm and anything he could tinker with; there wasn't much he wouldn't attempt to fix. Chuck enjoyed golfing and playing cards with his friends and family. He was an active community member, which was shown by his role in starting the West Bend Golf and Country Club and West Bend Ford. He was a member of the Sts. Peter and Paul Church and Knights of Columbus. Chuck also served on the school board. Survivors include his wife Carol of West Bend, IA, children: Joe (Sue) Schmidt of Ottosen, IA, Jane (Charlie) DeLaCroix of Greeley, CO, Paul (Lori) Schmidt of Ottosen, IA, Lisa Schmidt of Dubuque, IA, Brian (Nancy) Schmidt of Fort Dodge, IA, and Bruce Schmidt of Omaha, NE; grandchildren: Justin (Katie) Schmidt of Lakeville, MN, Nicole (Mike) Myer of Curlew, IA, Lindsey (Levi) Trauger of Algona, IA, Christopher (Mindy) Schmidt of Humboldt, IA, Alex and Darren DeLaCroix of Greeley, CO, great-grandchildren: Morgan, Wyatt and Tate Charles Myer, Leandra and Baby Trauger; brother Jim (Sherry) Schmidt of West Bend, IA, sister Marilyn (Lyle) Zeltwanger of Valparaiso, IN, and his uncle Ervin Banwart of West Bend, IA, 2 step granddaughters and 6 step great-granddaughters. He was preceded in death by his parents, Earnie and Ida, and his daughter, Karen in 2010. www.harrisfuneralservices.com

The family of Charles "Chuck" Ernest Schmidt created this Life Tributes page to make it easy to share your memories.

DO TO WEATHER CONDITIONS THE TIMES FOR MR. SCHMIDTS SERVICES...