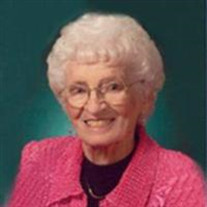 Charlotte I. Barber, 93 of West Bend died August 16, 2012 at Parc Hall Nursing Home in Emmetsburg, IA. Services will be held Monday 10:30 AM at the United Methodist Church, West Bend with burial to follow in the West Bend Cemetery. Visitation is from 3-6 PM Sunday at the church in West Bend. Harris Funeral Home in West Bend is in charge of arrangements. Charlotte Irene Kinseth, the daughter of Oliver and Olga (Floen) Kinseth was born October 25, 1918 in Ottosen, Iowa. She was baptized and confirmed at Trinity Lutheran Church, Ottosen. She graduated from the Ottosen High School in 1936. Charlotte was united in marriage with James "Red" Barber August 25, 1940 at the Trinity Lutheran Church in Ottosen. She taught Sunday School before and after her marriage for several years. She enjoyed singing and was a member of church choirs for over 50 years. She was a past leader of the Fern Valley and West Bend 4H groups, a member of L.S.L.C. for 50 years,and was a past worthy matron of the Eastern Star in West Bend. One of Charlotte's hobbies was making candles which she enjoyed for 15 years, including many wedding candles for brides in the area. She helped many families during funerals as a chairman of a funeral group, and she always enjoyed working with the flowers in and around her yard. Survivors include her son Dennis (Linda) Barber of West Bend, IA, daughter Donna (George) Roberts of Sioux Falls, SD, son Ronald (Joan) Barber of Cylinder IA,and daughter Rhonda (Tom) Frambach of Emmetsburg, IA, 10 grandchildren: Michelle (Mike) Hurt, Brett(Carey) Barber, Alysha (Dan) Jackson, Alyssa (Paul) Georgie, Teresa Roberts, Elizabeth (Dan) Messina, Nicole (Chris) Major, Rachel Barber, Aaron(Carrie) Barber, and Scott(Michelle) Frambach, 15 great grandchildren and many nieces and nephews, 2 brothers Richard (Ramona) Kinseth of Ottosen, IA, and Jerry(Clara) Kinseth of Dublin, Georgia. Charlotte was preceded in death by her parents, her loving husband James, sisters Delores Naeve and Marilyn Haug and brother Mount Kinseth Jr. Online condolences may be sent to www.harrisfuneralservices.com

Charlotte I. Barber, 93 of West Bend died August 16, 2012 at Parc Hall Nursing Home in Emmetsburg, IA. Services will be held Monday 10:30 AM at the United Methodist Church, West Bend with burial to follow in the West Bend Cemetery. Visitation... View Obituary & Service Information

The family of Charlotte I. Barber created this Life Tributes page to make it easy to share your memories.

Send flowers to the Barber family.