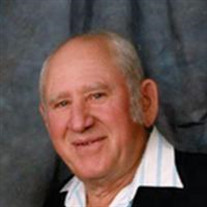 Ottosen: Cletis F. Hundertmark, 85 of Ottosen died Monday January 25, 2016 at Kossuth Regional Health Center in Algona. Services will be held Saturday, January 30, 10:30 AM at Trinity Lutheran Church, Ottosen with burial to follow in Union Cemetery, Ottosen. Visitation is from 3-7 PM Friday at the Harris Funeral Home in West Bend. During the visitation there will be a light lunch served at the West Bend Community Center, directly east of the funeral home for anyone that wishes to attend. The family respectfully requests memorials in lieu of flowers. Cletis Freeman Hundertmark, the son of Frank and Geneva (Jolliffe) Hundertmark was born September 8, 1930 in West Bend, Iowa. He moved with his family to Livermore when he was five, where he attended country school a mile south of his home until the third grade. He graduated from the Livermore High School. He then farmed before serving in the United States Army (1/1/2 years in Austria). After returning home from the service he was united in marriage on February 7, 1954 with Ruby Tendall at Trinity Lutheran Church in Belmond, IA. The couple made their home on a farm near Ottosen, IA during their 60 years of marriage. Along with farming, Clete did custom corn shelling and was an auctioneer for 30 years. He also did welding and wood working for himself and many others. He was a member Trinity Lutheran Church, Ottosen and the American Legion. Survivors include his children: Kathy Klaver of Altoona, IA, Paul (Ramona) Hundertmark of Ottosen, IA, and Lyle (Carol) Hundertmark of Ames, IA, 5 grandchildren, great grandchildren and many nieces and nephews, sister in law Marilyn Hundertmark of Humboldt. He was preceded in death by his parents, wife Ruby in 2014, son Lynn in 1987,brothers Ferris in 1998 and Norval in 2000, an infant brother, and his sister Elvira in 2011. Cletis enjoyed woodworking, especially making wooden toys for anyone who may request. He made tables, shelves, foot stools, and anything anyone may need. He donated many of his wooden items to auctions and fund raisers in the area; another way he helped others. He also loved fishing, giving friends fishing poles and fishing stools that he made to share his love of fishing. Simply, he enjoyed helping others and would never expect anything in return. Simply, he enjoyed helping others and would never expect anything in return. One of the best parts of his day was spending time with his friends drinking coffee and telling stories at the Villager in West Bend, and it was the best part of his friends day as well. Cletis is a great person and his family and friends are happy that he can finally be with his son Lynn and his loving wife Ruby. www.harrisfuneralservices.com

The family of Cletis F Hundertmark created this Life Tributes page to make it easy to share your memories.

Send flowers to the Hundertmark family.