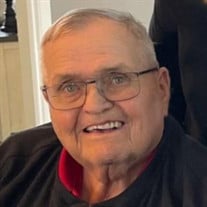 Daniel “Doc” Nesheim, age 79, of Mallard, passed away due to complications following surgery on March 15, 2022 at the Iowa Methodist Hospital in Des Moines. Funeral services will be at 10:30 AM on Friday, March 18th at Trinity Lutheran Church in Mallard. Burial will be at Rush Lake Cemetery, Mallard. Visitation will be at 9:00 AM until service time at the church. Daniel Albert Nesheim, the son of Grant and Beulah (Persons) Nesheim, was born on October 6, 1942 in Fort Dodge, Iowa. He graduated from Goldfield High School in 1961, where he played baseball, basketball and track. After high school Doc attended Iowa State University where he played baseball and was a member of the Men’s Glee Club. He graduated with a BS in Animal Science and a DVM degree in 1968. On January 10, 1971 Doc married Nancy Brown at the Mallard Methodist Church. They were blessed with 3 children: Jason, Jed and Heidi. Doc owned the Mallard Veterinary Clinic in Mallard where he practiced for over 50 years. He was inducted into the 4-H Hall of Fame on August 23, 2020, after a lifelong commitment to 4-H. Doc served on the initial board of directors of Spring Hills Golf & Country Club, the Palo Alto County Fair Board, the Palo Alto County Board of Health and President of the Tri-County Cyclone Club. Doc’s greatest joys in life were his children and grandchildren. He also enjoyed fishing trips to Canada and endless hours of visiting with friends. Left to cherish Doc’s memory are Nancy, his wife of 52 years; children, Jason (Kelly) Nesheim of Ankeny and Heidi (Bryan) Heinz of Andover, KS; grandchildren, Claire, Regan and Cael Nesheim and Lauren and Sydney Heinz; siblings, Caroline Lund of Clarion, Fred (Marie) Nesheim of Goldfield and Kathy (Bruce) Hansel of Badger. He was preceded in death by his parents and an infant son, Jed Nesheim.

Daniel &#8220;Doc&#8221; Nesheim, age 79, of Mallard, passed away due to complications following surgery on March 15, 2022 at the Iowa Methodist Hospital in Des Moines. Funeral services will be at 10:30 AM on Friday, March 18th at Trinity... View Obituary & Service Information

The family of Daniel "Doc" Nesheim created this Life Tributes page to make it easy to share your memories.

Send flowers to the Nesheim family.