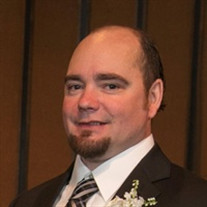 Daren LeRoy Wilson, the son of Dennis Wilson and Linda Hatland, was born on August 17, 1971 in Virginia, Minnesota. Daren attended Grand Rapids, Minnesota public schools, and graduated from Grand Rapids, High School in 1989. He attended Iowa Lakes Community College for 2 years, obtaining his trade certificate in welding. He worked as a welder for several years at Polaris and AGCO, before landing his dream job with B & H in Jackson, MN. In 1999, Daren made his home in Petersburg, Minnesota on a beautiful piece of land on the Des Moines river. Daren passed away at his home in Petersburg on January 9, 2019 at the age of 47 years, four months and 23 days. Services will be held Friday, January 18, 2019, 10:00 AM at the United Methodist Church in West Bend with burial to follow in the West Bend Cemetery. Daren had a passion for the outdoors. He loved ice fishing, bow hunting, and hockey: pond, pro, and college and thoroughly enjoyed teaching little kids how to play the game. He could fix almost anything with a motor. Daren is survived by his father Dennis (Diane) Wilson of West Bend, Iowa; his mother Linda Hatland of Spirit Lake, Iowa; his sisters Denda (Dean) Evans of Spirit Lake, Iowa; Debora (Steve) Bueltel of Superior, Iowa; his brother Lyle (Jaci) Pauling of Sherburn, Minnesota; and his loved one Alethea Rostad of Jackson, Minnesota Also surviving are his nieces and nephews: Aston Gellert, Adam Gellert, Tate Evans, Cody Ramsey, Kayla McNew, Trevor Bueltel, Adison Pauling, and a great niece Calli Gellert. Daren is preceded in death by his paternal grandparents Leonard and Norma Wilson and his maternal grandparents Elmer and Lucille Simacek and his beloved dog “Goose”. Blessed be the memory of Daren Leroy Wilson. A celebration of Daren’s life will take place at 3p.m. on Saturday, January 19th at the family farm, one mile East of Superior, Iowa

The family of Daren LeRoy Wilson created this Life Tributes page to make it easy to share your memories.

Send flowers to the Wilson family.