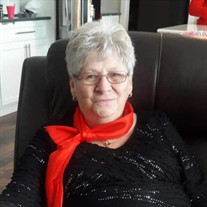 Darlene Bollinger, age 85, of Fenton, passed away on February 18, 2022, at the Kossuth Regional Health Center in Algona. Funeral services will be 10:30 AM on Saturday February 26th at Immanuel Lutheran Church in Lotts Creek. Burial will be in the Lotts Creek Cemetery. Visitation will be 4-6 PM Friday at the church. Darlene M. Bell, the daughter of Alfred and LuEllna (Bierstedt) Bell, was born on May 21, 1936, in Fenton, Iowa. She attended parochial school and then high school in Whittemore. On October 17, 1954, she was united in marriage to Wayne Bollinger at St. Paul Lutheran Church in Whittemore. They lived in Algona for a year then made their home on the farm South of Lone Rock (Lotts Creek). After Wayne’s death in 1997 she moved to Fenton. Darlene was a member of Immanuel Lutheran church in Lotts Creek where she was a former member of Ladies Aide. Darlene was always busy. In her early years she sold Avon until she took a job at Berkley’s in Emmetsburg. After 15 years at Berkley’s, her love of garage sales led to opening Granny’s Attic, a second-hand store in Lone Rock that she ran for 15 years. She was from that point on known as "Granny" to everyone that met her. Her love for people had her waitressing for the café’ in Lone Rock into her 70's and when that closed, she went to work at the Ringsted café, where she worked into her 80's. Wayne and Darlene spent many weekends camping with friends and family. She had a way of making friends wherever she went. Her family was the love of her life; but card games, BINGO, scratch and pull tickets, and slot machines were some of her most favorite things as she loved the challenge and the excitement of the win. She had an unbelievable lucky streak with her most recent big win being $10,000 on a slot machine at the Wild Rose; shortly after beating colon cancer a second time. Gardening, cooking, and baking were also a passion for her and she loved to share with everyone. Her amazing love, compassion, and generosity towards her family and friends, and basically anyone she met, will be deeply missed. Left to cherish Darlene’s memory are her children, Randy (Lanelda) Bollinger of Lone Rock and Judy (Alan) Thilges of Fenton; grandchildren, Kari Bollinger, Jenny (Fred) Gielau, Jessica (Mike Hatland) Lehmkuhl, Kurtis (Michele) Bollinger, and Ashley VanScoy; 13 great grandchildren; a sister, Ruth Elbert of Ankeny; sister-in-law, Niki Bell of West Des Moines; and her special friend Don Lee of Whittemore. She was preceded in death by her parents; husband; a grandson, Kenny Bollinger; a brother, Paul Bell; a nephew Christopher Bell and in-laws, Kenneth, Hilda, Norman, and Joan Bollinger, Bill Elbert, and Carol Tietz.

Darlene Bollinger, age 85, of Fenton, passed away on February 18, 2022, at the Kossuth Regional Health Center in Algona. Funeral services will be 10:30 AM on Saturday February 26th at Immanuel Lutheran Church in Lotts Creek. Burial will... View Obituary & Service Information

The family of Darlene Bollinger created this Life Tributes page to make it easy to share your memories.

Darlene Bollinger, age 85, of Fenton, passed away on February...

Send flowers to the Bollinger family.