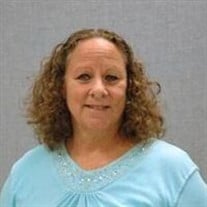 Click here to view/print Funeral Folder Debra Kea (Cast)Weir, age 60, of Emmetsburg, Iowa passed away at her home on July 10, 2020 after a courageous battle with cancer. A "walk-through" Visitation, will be held on Monday, July 13, 2020 from 4:00 pm - 7:00 pm at the First United Methodist Church Fellowship Hall in Emmetsburg, Iowa.  Social distancing will be necessary at the visitation. A private Funeral Service will be held on Tuesday, July 14, 2020.   Deb, born on February 25, 1960, was the daughter of Robert H. and Dorothy J. (Goodchild) Cast.  She was raised on a farm near West Bend, IA and attended West Bend Community School where she excelled in basketball, track, and softball.  Following graduation in 1979, she entered the medical assistant program and played softball at Iowa Central Community College in Fort Dodge, IA. On June 28, 1986, Deb was united in marriage to Art Weir in West Bend, Iowa. They made their home in Emmetsburg, Iowa for a few years and then moved to Arvada, Colorado.  Shortly after returning to Emmetsburg, they welcomed their son, Matthew William Weir, on May 22, 1992.  Art was tragically killed on August 4, 1994 in a dredging accident on Five Island Lake in Emmetsburg. In the spring of 1997, Deb met Bill Bramley and before long they began building a life together that spanned over 23 years.  She loved the many trips they made with the kids in their RV and cherished all the special memories made while on those adventures. For nearly ten years, they were a part of the Beach Bums BBQ Team and enjoyed entering competitions in numerous states in the Midwest.  Deb and Bill were also avid Iowa Hawkeye fans and tailgated in “Compound W” for all the home Iowa football games. Deb was known for her warm hospitality and delicious food she prepared for anyone who happened to drop by before the games.  For the past nine years, their BBQ buddies and several friends from “Compound W” prepared a meal during one of the spring training days for the Hawkeye football players, coaches, and support staff. Deb received a special surprise on her 60th birthday this past February when Kirk Ferentz, Iowa's Head Football Coach, called to wish Deb a happy birthday. Deb worked in various professions over the years, but was most recently employed at Prairie Lakes Area Education Agency as an administrative assistant and a media specialist for the lending library.  At work she was known for her great sense of humor and incredible work ethic.  All who knew Deb will remember her for her spunky personality, quick wit, and her never-ending devotion to her family and friends. Family members left to cherish her memory are: her loving husband, Bill Bramley; sons Matthew Weir (Allie) of Fort Dodge, IA, Eric Weir (Heather) of Dubuque, IA,  and Austin Bramley of Sioux Falls, SD; daughters Mandy (Josh) Frey and Andrea (Jakob) Parmley, both of Sioux Falls, SD; mother, Jan Cast of West Bend, IA; sisters Ev(Orv) Otten of Ankeny, IA, Lori (Steve) Baade of Havelock, IA, Julie (Bill) Freking of Brandon, SD, Mary (Steve) Banwart of West Bend, IA; brothers Robert (Robin) Cast of Manning, IA and Mike (Mya) Cast of Racine, MN; grandchildren Landon Frey, Lenora and Beckham Parmley, Jack and Colt Weir and Matt's daughter who will arrive in December; and in-laws Velma Weir and Jim Bramley. She is also lovingly remembered by her many nieces and nephews and all her dear friends.   Deb was preceded in death by her first husband, Art Weir, her father, Robert H. Cast, grandparents, Clyde and Hilda Cast, Fred and Dorothy Goodchild and in-laws Jack Weir and Maggie Bramley. The family would like to give a heartfelt thank you to the Palo Alto County Health System Hospice Department, especially Nicole Christensen and Kim Krause.  These two compassionate professionals played a key role in making the last months of Deb's life the best they could be. The family appreciated all the support they provided and will be forever grateful.

Click here to view/print Funeral Folder Debra Kea (Cast)Weir, age 60, of Emmetsburg, Iowa passed away at her home on July 10, 2020 after a courageous battle with cancer. A "walk-through" Visitation, will be held on Monday, July 13, 2020 from... View Obituary & Service Information

The family of Debra K Weir created this Life Tributes page to make it easy to share your memories.

Send flowers to the Weir family.