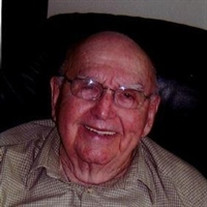 Delbert Franklin Dogotch was born May 23, 1921, on a farm southwest of Whittemore, Iowa to Frank Sr. and Katie (Falb) Dogotch.  He graduated from the Whittemore High School and attended the Hamilton Business School.  He served in World War II as a Lieutenant in the Coast Guard/Navy.  He was on a ship that rammed an enemy submarine and took prisoners on board.  At the end of the war, he was on a ship located at Japan.  He decommissioned that ship before returning home. On December 4, 1946, Delbert was united in marriage to Norma Maxine McCullough of West Bend at the United Methodist Church in West Bend.  They lived and farmed southwest of Whittemore for 40 years where they raised their famly.  In 1985 Delbert and Norma built a home in West Bend and retired there.  At the age of 90, Delbert moved into Priarie Creek Assisted Living in West Bend and in recent years he lived at West Bend Health and Rehab until his death at age 96. Delbert served on the board of the Pocahontas Rural Electric Cooperative and was president of the board during the last years he served.  He was an active member of the United Methodist Church in West Bend until his health prohibited.  He enjoyed golfing.  He was a fan of the Minnesota Twins and Vikings and University of Iowa football and basketball teams.  He enjoyed traveling with Norma throughout the United States.  They traveled through every state except Washington, Oregon, Alaska and Hawaii.  He loved his family, immediate and extended, and the communities of Whittemore and West Bend.  He enjoyed people. Surviving Delbert are his children:  Cheryl (Tim) Marr of Crescent, IA, Ronald (Diana) Dogotch of Houston, TX, and Joyce (Ken) Russell of Lincoln, NE; 7 grandchildren:  Heather, Amanda, Kimberly, Heidi, Katie, Johanna and James; 9 great grandchildren:  Jaxson, Spencer, Eve, William, Nile, Ella (Russel), Ella (Knight), Turner, and Sophia; and sister Dorothy Mergen of Estherville, IA. Delbert was preceded in death by infant son Robert, wife Norma in 2009, parents, and three brothers:  Leo, Louis, and Frank Jr.

Delbert Franklin Dogotch was born May 23, 1921, on a farm southwest of Whittemore, Iowa to Frank Sr. and Katie (Falb) Dogotch.  He graduated from the Whittemore High School and attended the Hamilton Business School.  He served in World War II... View Obituary & Service Information

The family of Delbert Franklin Dogotch created this Life Tributes page to make it easy to share your memories.

Send flowers to the Dogotch family.