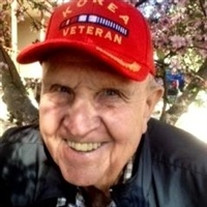 Plover...Derrold "Tiny" Baumann 86, of Plover IA went to his Heavenly home on Saturday February 16, 2019 in Apache Junction, AZ.  Services will be held 10:30 AM Saturday April 13, 2019 at the Harris Funeral Home Chapel in Mallard, IA with visitation one hour prior to services.  A luncheon will follow services at the PC Harris Hall adjacent to the funeral home.  Burial will take place at St. Michaels Cemetery, Whittemore IA.  Derrold Baumann, the son of Mike and Eleanor (Miller) Baumann was born March 27, 1932 in Whittemore, IA where he was raised and received his education, graduating from Presentation Academy.  He served his country during the Korean Conflict in the United States Army.  On January 28, 1961 Derrold was united in marriage with "Becky" Luella Olinger.  The couple made their home in Plover where Derrold was the manager of the grain elevator for many years.  After retiring, Tiny and Becky enjoyed traveling to Arizona to spend their winters, living at Superstition Sunrise Park in Apache Junction.  While there, Tiny enrolled in a jewelry creating class, which later became a passion for him.  On park craft days he often displayed his jewelry for sale.  On game days he liked playing cards with friends.  Early morning coffee was a daily routine at the park center to joke with his buddies and hear the latest news.  Survivors include his sisters Mary Ann Taylor and Jody (Ron) Johnson who reside in Mason City, IA, sister in law Patricia Baumann who lives in Whittemore IA, special friend Marie Peterson, as well as nieces, nephews, cousins and many friends.  He was preceded in death by his parents, wife, Becky, brother Patrick Baumann and brother in law Bryan Taylor. www.harrisfuneralservices.com

Plover...Derrold "Tiny" Baumann 86, of Plover IA went to his Heavenly home on Saturday February 16, 2019 in Apache Junction, AZ.  Services will be held 10:30 AM Saturday April 13, 2019 at the Harris Funeral Home Chapel in Mallard, IA with visitation... View Obituary & Service Information

The family of Derrold Tiny Baumann created this Life Tributes page to make it easy to share your memories.

Send flowers to the Baumann family.