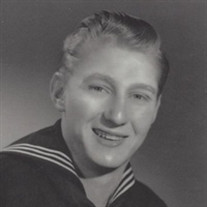 West Bend...Donald Sage, 88 of West Bend died January 20, 2019 at the West Bend Health and Rehab Center.  Services will be held 10:00 AM Thursday, January 24, at Peace Lutheran Church, West Bend with burial to follow in Union Cemetery, Pomeroy.  Visitation is from 4-7 PM Wednesday at the church. Harris Funeral Home of West Bend is assisting the family. Don Sage, the son of Hilbert and Reka (Loots) Sage was born May 1, 1930 in Pomeroy, IA, where he was raised and received his education, graduating from the Pomeroy High School in 1947. He served his country in the United States Navy from 1950-1954 during the Korean Conflict. Don started farming on the family farm in 1955. On August 7, 1955, he was united in marriage with JoAnn Stacy . The couple moved to West Bend in 1959 and continued farming until 2000. He then drove mail truck for 10 years before retiring. Survivors include his wife JoAnn of West Bend, IA, children: Rick (Sharon) Sage of North Chesterfield VA, Rolland (Jolene) Sage of Nebraska City, NE, Jackie (Scott) Kampen of Ottosen, IA, Todd (Patty) Sage of Morton, IL, Ginger Thompson of Forest City, IA, and Judy (Chad) Kracht of San Antonio TX; 12 grandchildren, 23 great grandchildren and a sister Delores Shimon of Pocahontas, IA. Don was a member of Peace Lutheran Church and the American Legion Post of West Bend, IA. He passed away at the West Bend Health and Rehab facility. He was preceded in death by his parents, brothers: George, Fred and Merle, sisters: Ann, Grace, Marlene, and Laura and a son-in-law Dave Thompson.  www.harrisfuneralservices.com

The family of Donald Leroy Sage created this Life Tributes page to make it easy to share your memories.

Send flowers to the Sage family.