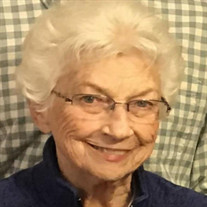 Donna Bormann, age 89, of Algona passed away peacefully surrounded by her family on September 26, 2021 at the Kossuth Regional Health Center in Algona. Mass of the Christian Burial will be 10:30 AM on Friday at the Divine Mercy Catholic Parish - St. Joseph in St. Joseph, with Rev. Merle Kollasch, Rev. John Thomas and Deacon Bill Black celebrating. Burial will take place in St. Joseph Catholic Cemetery. Visitation will be 4:00 – 7:00 PM Thursday with a 3:30 PM Rosary at the Divine Mercy Catholic Parish - St. Joseph in St. Joseph. Services will be live streamed on the Lentz Funeral Home Facebook page. Donna Rae Bormann, the daughter of Joe and Genevieve (Leonard) Weydert, was born on June 27, 1932 in Algona, Iowa. She graduated from St. Joseph High School in 1950 and attended college in Omaha, Nebraska. After college Donna worked as a medical assistant for Dr. Beardsley in Livermore. She then worked at the Kersten Medical Clinic in Fort Dodge. On September 13, 1955 Donna was united in marriage with Howard John Bormann at the Sacred Heart Catholic Church in Livermore. The couple farmed and raised their five children; Denis, Kevin, Cindy, Jan, and Nancy. Donna was a member of St. Joseph Catholic Church where she developed and shared her faith with friends and family. She would always be found with a rosary in one hand and her prayer book in the other. Donna spent her spare time involved in other organizations such as CDA of Fort Dodge, The Friendly Club in Fort Dodge, and Rosary Making Club. It brought great joy to Donna knowing she had given all her children one of her handmade rosaries. Hosting card games and being a member of the 500 Card Club were a few of her favorite social activities. She enjoyed gardening, cooking, and enjoying sweet treats. Donna frequently listened to music throughout her day, with Engelbert Humperdinck and Frank Sinatra being some of her favorites. Donna and Howard’s home was constantly filled with two things: flowers and family. Her most cherished memories were watching her grandchildren and great-grandchildren grow up. Donna’s passionate and selfless spirit impacted all those she came across. Left to cherish Donna’s memory are her children, Denis Bormann of Carroll; Kevin (Renee) Bormann of Algona, Cindy (Kevin) Walker of Algona, Jan (Henry) Wood of Urbandale, and Nancy (Mike) Brtek of Norfolk, Nebraska; seven grandchildren, Maria (Mark) Steier, Mallory (Garrett) Liss and Trevor Bormann, Matthew (Merrick), Nathan, Kerstin, and Justin Brtek; four great-grandchildren, Charleigh, Kacy, Shaylin and Alice Steier; a great-grandchild on the way; a brother, Don Weydert of Gilmore City; sisters-in-law, Joann Bormann of St. Joe, Donna Mae Hilbert of Algona and Joan Weydert-Baginski of Macon, Missouri. She was preceded in death by her parents; husband; brother Jerry Weydert; brothers-in-law, Gordon Hilbert and Don Bormann; and a sister-in-law, Lucille Weydert.

Donna Bormann, age 89, of Algona passed away peacefully surrounded by her family on September 26, 2021 at the Kossuth Regional Health Center in Algona. Mass of the Christian Burial will be 10:30 AM on Friday at the Divine Mercy Catholic... View Obituary & Service Information

The family of Donna Bormann created this Life Tributes page to make it easy to share your memories.

Send flowers to the Bormann family.