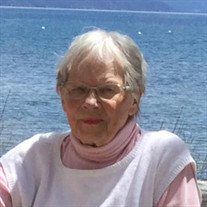 Dora Ward passed away on Monday, May 17th, after losing her battle with Cancer. She joins her husband, Ken, who passed away in 2010. She was preceded in death by her husband, her parents, Leonard Norton and Sylvia Matilda (Crowley) Hendry; her paternal grandparents, James Jefferson and Elizabeth Bathsheba (Reddick) Hendry; her maternal grandparents, Charles Gustavus Lawrence and Ida Virginia (Rawls) Crowley. Her maternal step grandmother was Annie Elizabeth (Rousseau) Crowley; her brother and his wife, Leonard and Nellie Hendry, her sister Betty Calvin, her sister and husband, Robert and Sylvia Porter, her husband's parents, Harry and Nancy Ward, her sister-in-law and husband Dorothy and James Cox, her brother-in-law and wife, Curtis and Fran Ward, her brother-in-law and his wife, Don and Phyllis Ward and her brother-in-law, Ray Bilsborough. She mourned the death of nieces, Berneice Lauser Peace, Melissa Porter Renwick and great nephew Andrew Gray. Those she leaves are Kevin Ward of Denver CO, Michael and Jacqueline Ward of San Bruno CA, and Brian and Angela Ward of Melbourne, FL, her grandchildren, Brittany of Atlanta, GA, Conner and Jenna of San Bruno, CA, Kati of Melbourne, FL and Erin Ward and her husband, Billy Ottlinghaus of Bradenton, FL, and numerous other cherished relatives. (Dora was into genealogy - those last 2 paragraphs are for people like her.) Dora May Hendry was born on November 13, 1930 in Clearwater, Florida. Despite growing up during the Great Depression and World War 2, Dora felt Clearwater was the perfect place to grow up and her childhood was mostly happy. The activities she enjoyed included swimming, sailing, exploring mangrove island, searching for unusual sea creatures on the grassy sandbars, climbing those sprawling oak trees in her neighborhood and riding her bicycle as far as her energy would take her. Mostly in the company of her older sister Sylvia and her friends from the neighborhood. All of whom she kept in contact with their whole lives. After graduating from Clearwater High School in 1948, she stayed with her sister Betty and her family in Akron, Ohio while attending Hammel Business University for a year. While there, Betty and her husband Tim introduced Dora to “some of the finer things in life”, including the opera. Opera became a passion of her for the rest of her life. She moved back to Florida and began working for Personal/Beneficial Finance companies in Clearwater and Tampa. It was at this time when she met her husband Kendell W. Ward. On October 3, 1952 they were married. In 1955 they moved to Des Moines, Iowa when Ken got a job with the Armstrong Rubber Company (now Titan). As a ‘Florida Girl’, winters in Iowa were tough for Dora but she made the best of it developing a love of ice skating. She continued her work for loan companies. In 1956 Dora had the first of her 3 children (Kevin, Micheal & Brian). In 1959 they moved to Windsor Heights, Iowa, which has been home ever since. Dora was gratefully unemployed during her son's early years and enjoyed walking in their world of wonder. During those years, she volunteered for many activities in which her sons were involved, including school, church and scouts. She also volunteered for Crisis Line. In 1979, she began work at Windsor Heights Styling Salon and worked there until 2007. She loved working with salon owner Edna Troutman and learning the secrets of the salon’s success (and it was very successful). She also loved interacting with the salon’s clients, many of whom she knew for years. Dora will be remembered for drip sand castles, computer generated cards, slide shows and children’s books, her sense of fun and adventure, obsession with all things Clearwater and her enthusiastic pursuit of ancestor information and most of all for love of family - individual and extended. Family was important to her. She was proud of the good men her sons became, of the wives they chose and the grandchildren she admired. She also cherished the relationship she had with her siblings, siblings-in-law, their children, grandchildren and great grandchildren. She enjoyed riding her bike on the bike trails in the Des Moines area. When she couldn’t ride a bike (balance issues) she switched to a tricycle. When she couldn’t make it up the hills on her own, she added an electric motor. She kept on riding. Last fall Dora began having pain in her leg when she walked. As it got worse, she had trouble getting around. She resisted going to a doctor. In March her family forced her to go to the doctor to find the cause. In the course of finding the cause of her leg pain they found she had Cancer that has spread throughout her body. She prepared for “the end” but was in good spirits. In early May she went for a ride on her tricycle hoping to do one last ride on her beloved bike trail. She never made it. On the way there she lost control of her bike and crashed, severely injuring herself. She left the emergency room and went into hospice care at home. She died there, in peace and surrounded by her family. Her family is complying with her wish to have no service for her. She suggested that anyone who would like to say goodbye, go to a bike trail or any body of water, her sanctuaries, to remember her.

Dora Ward passed away on Monday, May 17th, after losing her battle with Cancer. She joins her husband, Ken, who passed away in 2010. She was preceded in death by her husband, her parents, Leonard Norton and Sylvia Matilda (Crowley)... View Obituary & Service Information

The family of Dora Ward created this Life Tributes page to make it easy to share your memories.

Dora Ward passed away on Monday, May 17th, after losing her battle...

Send flowers to the Ward family.