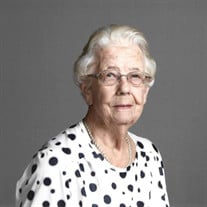 Long-time Humboldt resident, Doris Mae Van Horn, passed away at her home on October 14, 2021. A Mass of Christian Burial will be held on Wednesday, October 27, 2021 at 10:30 a.m. at St. Mary’s Catholic Church in Humboldt. Burial will take place at St. Mary’s Cemetery in Humboldt. Visitation will be held on Wednesday from 9:00 – 10:15 a.m. at Lentz Funeral Home in Humboldt. Doris Mae Van Horn was born on January 24, 1929 to George and Karen (Flint) Meyer in Ringsted, Iowa. She worked for Dittrich Eggs where she took over a position from a gentleman who was drafted into the United States Army during WWII. Upon his return, the gentleman named John Van Horn, and Doris met. The couple was united in marriage on Doris’ birthday, January 24, 1947. Doris and John later purchased the property where he grew up on in Humboldt and together, they built their home – the same home Doris still resided in. They raised four children: Jim, Susan, Diane and Shelley. Doris was a member of St. Mary’s Catholic Church and St. Mary’s Women’s Society where she served as an officer. Doris was an avid bowler. She shared her love for Bingo by volunteering at the North and South Care Center Bingo events for their residents, in addition to helping her spouse manage weekly Bingo nights for both St. Mary’s Church and the American Legion Adams Post #119. Many remember Doris for her cream cheese mints that were at many local events. Left to cherish Doris’ memory are her children: Jim (Becky) Van Horn of Humboldt, Susan (Ron) Sorlien of Parker, Colorado, Diane Messerly of Fort Dodge, and Shelley (James) Gagnier of Humboldt; nine grandchildren; fourteen great grandchildren; sisters Neva Helvick and Geraldine Harris, and numerous other family members and friends. She is preceded in death by her parents; husband John Van Horn in 2016; son-in-law John Messerly; brothers Clarence and Elvin Meyer; sister Ruth Powell; brother-in-laws Gene and Edward Van Horn, and sister-in-laws Edith Soppeland, Agnes Tish, Mary Smith and Frances Harbacheck

The family of Doris Van Horn created this Life Tributes page to make it easy to share your memories.