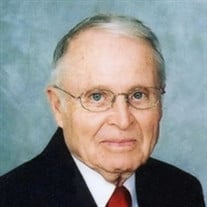 West Bend...Earl William Stevens, 97 of West Bend died January 20, 2019 at his home in West Bend.  Services will be held 10:30 AM Friday, at the United Methodist Church, West Bend with burial to follow in the West Bend Cemetery. Visitation is from 4-6:30 PM Thursday at the church.  Harris Funeral Home is assisting the family.     Earl went home to be with the Lord, peacefully passing at his home with his son at his side.     Earl, the son of Earl L. Stevens and Dora Ernst was born August 27, 1921, on a farm in rural Cresco, Iowa. At the age of 6, his father passed and the family moved into the town of Cresco. He received his education and graduated from the Cresco High School.   After graduation, he attended Luther College before his enlistment in the Army Air Corp serving his country during WWII from 1943-1946.  He was stationed in the Philippines when the U.S. returned to the island, preparing to invade Japan. He boarded a troop ship to be a part of the invading force into Japan. The plans changed for the invasion and he became part of the occupying force in Japan. Upon his honorable discharge from the service, he entered the Iowa State Teachers College in Cedar Falls and received his B.S, degree in Mathematics.   He taught in a small school in central Iowa before moving to Burt, Iowa, where he met the love of his life, Janet S. Mertz. They were united in marriage in 1954 Burt, Iowa.  The couple moved to West Bend in 1954, where he served as principal from 1955-1961 and superintendent from 1961-1983 when he retired. After his retirement, he enjoyed attending athletic events. He and his wife of 59 years, wintered in Rio Grand Valley, Texas for more than 20 years. Survivors include his sons, Scott (Cathy) Stevens of Marshalltown, Iowa, and Shawn Stevens of West Bend, Iowa, granddaughters Allison (Jordan) DenHartog, of Urbandale, Iowa and Janelle (Jesse) DeGeest of Altoona, Iowa, as well as two great grandchildren, Charlotte and Amelia. Earl was a member of the United Methodist Church, the West Bend American Legion and was a charter member of the West Bend Lions Club.  He was preceded in death by his parents, wife Janet, and sisters Ione and Darlene.   www.harrisfuneralservices.com

West Bend...Earl William Stevens, 97 of West Bend died January 20, 2019 at his home in West Bend.  Services will be held 10:30 AM Friday, at the United Methodist Church, West Bend with burial to follow in the West Bend Cemetery. Visitation is... View Obituary & Service Information

The family of Earl William Stevens created this Life Tributes page to make it easy to share your memories.

Send flowers to the Stevens family.