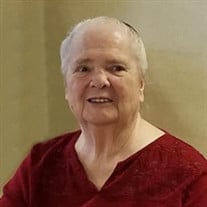 Edith Caroline (Grimm) Kellenberger, the daughter of Eli and Lena (Banwart) Grimm was born on December 20, 1923 in rural West Bend, IA, where she was raised and received her education. She was baptized and became a faithful member of the Apostolic Christian Church on July 19, 1942. She was united in marriage to Ernest Kellenberger on September 5, 1948 in West Bend, IA. On that same day in a double ceremony, her sister Eleanor was united in marriage to Elmer Steffen. Edith and Ernest began their married lives on a farm in Lester, IA, and later moved to rural Algona, IA, to continue farming. Edith worked side by side with her husband on the farm and there was no job that she couldn’t do. Upon their retirement, they moved to Whittemore and later to a home in West Bend. From 1982 to 2002, Edith was a cook at the Kossuth County Home in rural Algona, where she known for her great cooking skills. She loved being around the residents and workers there. It was very important to Edith to receive a GED degree and she past the tests in August of 1993. Edith loved her grandchildren and great grandchildren. She made pancakes on Sunday mornings for Bryan and John until they graduated and left home. This was a special “Grandma time” to her. In April 2012, Edith moved to Prairie Creek Assisted Living in West Bend and in November 2015 moved to the Health and Rehab Center. Edith is survived by her daughter-in-law, Moira Kellenberger and her sons Bryan (Tonya) Kellenberger and children Jentz, Ryal, and Dakotah; John (Carrie) Kellenberger and son Caleb; her son Joel (Teresa)Kellenberger and children Jeni, Lee and Todd and grandchildren. She is also survived by brothers and sisters: Lorane Martin of Peoria, IL, Arlo (Marilyn) Grimm of Algona, IA, Delano (Mary Ann) Grimm of Bloomington, IL, Edward (Donna) Grimm of West Bend, IA, Dean (Nadine) Grimm of West Bend, IA, Eli Jr. (Margaret) Grimm of West Bend, IA, Carole (Larry) Fehr of West Bend, IA, Lavonne (Verle) Kieser of Dunlap, IL, and Dianne (Marvin) Knobloch of Chillicothe, IL, and numerous nieces and nephews. She was preceded in death by her husband Ernest, son Warren, parents, Eli and Lena Grimm, brother Clifford and his wife Rosene, Elaine Kellenberger and her husband Henry, Eleanor Steffen and her husband Elmer, and brother-in-law Ervin Martin

Edith Caroline (Grimm) Kellenberger, the daughter of Eli and Lena (Banwart) Grimm was born on December 20, 1923 in rural West Bend, IA, where she was raised and received her education. She was baptized and became a faithful member of the Apostolic... View Obituary & Service Information

The family of Edith Caroline Kellenberger created this Life Tributes page to make it easy to share your memories.

Edith Caroline (Grimm) Kellenberger, the daughter of Eli and...

Send flowers to the Kellenberger family.