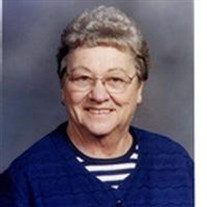 Gilmore City...Edna Davis, 90 presently of Humboldt, formerly of Gilmore City died Saturday February 20, 2016 at the Long Term Care Center, Humboldt, IA. Services will be held Thursday, February 25, 11:00 AM at Faith United Methodist Church, Gilmore City with burial to follow in Marble Valley Cemetery. Visitation is prior to services from 10 AM - 11:00 at the church. Harris Funeral Home of Gilmore City is in charge of arrangements. Edna Arlene Davis, the daughter of Warren A. and Mabel F (Sheperd) Vickers was born June 3, 1925 in Marshalltown, IA. She was raised and educated in State Center, IA and graduated from the Ferguson High School. On February 2, 1944 she was united in marriage with Melvin (Bob) Davis in Tampa, Florida. The couple located to the Gilmore City area in 1945 where they lived and farmed for many years. Melvin and Edna retired to Humboldt, IA in 1995. Survivors include her daughters Sandra (Ron) Ratzlaff of Solon, IA, and Bonnie Davis of McAllen, TX, grandchildren: Eric Ratzlaff (Elke Rudloff) of Grafton, WI, Ethan Ratzlaff (Mary Clark) from Queen Creek, AZ, and Tony and Mandy Davis from Gilmore City, IA. Preceding Edna in death was her husband Melvin (Bob) Davis and an infant son, Terry Lee. Edna was a member of Faith United Methodist Church and the United Methodist Women organization. Her two favorite trips were visiting Alaska and traveling through Mexico. Through the years, she enjoyed jigsaw puzzles, sewing, and camping. Her latest pastime was learning the computer, the joy of using the social network including Facebook and the enjoyment of playing computer games. www.harrisfuneralservices.com

The family of Edna Davis created this Life Tributes page to make it easy to share your memories.

Send flowers to the Davis family.