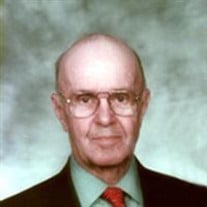 Edward Matthew Schmalen, son of Nick and Lena Mersch Schmalen, was born March 14, 1930, in West Bend, Iowa. He attended Sts. Peter & Paul’s Catholic School through 8th grade. Edward graduated from West Bend High School in 1947. He farmed with his family before serving in the army during the Korean War. He served his country from January 1952 to December 1953. In 1954, Edward bought his own land near West Bend, which he farmed for the next 50 years until his retirement in 2004. Edward was united in marriage with Rita Haag Putze July 24, 1976, at Sacred Heart Catholic Church in Ledyard, Iowa. The couple made their home on Edward’s farm near West Bend and together raised their children. Edward was a member of the American Legion and was West Bend Township Trustee for many years. He faithfully attended Sts. Peter & Paul’s Catholic Church and enjoyed playing cards, dancing, woodworking and gardening. Survivors include his wife Rita Schmalen of West Bend, IA; son Loren Putze and his wife Yvonne of Jefferson, OR; son Matthew Putze and his wife Angela and their children Emily, Mark, Michelle, Suzanne, Ryan, Mary, Sarah, Rachel and Seth of Moville, IA; daughter Sharla Kuyper and her husband Jerome of West Bend, IA; and son Aaron Putze and his wife Crystal and their children Garrett, Grant and Jaelyn of Waukee, IA; sister Juanita Yoch of West Bend, IA: and brother-in-law Garmon Adams of Whittemore, IA. Edward was preceded in death by his parents; brother John Schmalen and his wife Marjorie; sister Mildred Adams; brother-in-law Clarence Yoch and several nephews. wwwharrisfuneralservices.com Services will be held Saturday, June 17, 2017, 10:30 AM at Sts. Peter and Paul's Catholic Church with burial to follow in the church cemetery. Visitation will be from 5-7 PM Friday at the church where a rosary will be recited at 4:45 PM and a vigil service held at 6:45 PM. www.harrisfuneralservices.com

The family of Edward Matthew Schmalen created this Life Tributes page to make it easy to share your memories.

Send flowers to the Schmalen family.