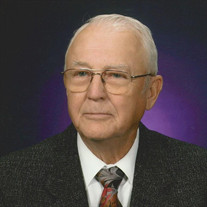 Elden “Flick” Lanning, age 89, of Gilmore City passed away on Wednesday, December 22, 2021 at Bickford Cottages Assisted Living in Ft. Dodge, Iowa. Funeral Services will be held at 10:30 AM on Thursday, December 30 at the United Methodist Church in Gilmore City. Burial will take place at Marble Valley Cemetery in Gilmore City. Military Rites will be conducted by the Gilmore City American Legion Post # 239, the Sather’s Odgaard VFW Post #5240 and American Legion Post #119 of Humboldt. Services will be live streamed on Lentz Funeral Home’s Facebook page https://www.facebook.com/Lentz-Funeral-Home-122511234501273. Visitation will be 4:00 – 6:00 PM on Wednesday at Lentz Funeral Home in Gilmore City. Flick was born May 25, 1932, in Grand Meadow, Minnesota, to Dewey and Gwen (Jolliffe) Lanning. Shortly thereafter, the family moved to Bradgate, Iowa, where they remained and Flick and his siblings grew up. He graduated from Bradgate high school in 1950. After graduation, he worked various jobs and in 1952 joined the U.S. Navy. He was assigned to the USS Whetstone where he served during the Korean War until his discharge in 1956. In 1953 he married Neva Gangstad, of Gilmore City, Iowa. The couple lived in San Diego until his naval discharge. The couple then returned to Gilmore City where they began a career in farming and milking cows and raising hogs. Flick was an active member over the years in the Masonic Lodge, the Eastern Star, the American Legion, Lion’s Club and the United Methodist Church. Flick is survived by his children, Doug (Diane) of Gilmore City, Dana (Lisa) of Ankeny, brother Delmar of Westminster, Colorado, 6 grandchildren, 10 great-grandchildren, as well as extended family and friends. He was preceded in death by his parents, wife, Neva, brother, Bruce and sister, Veda Isacson. The family would like to offer their thanks to the Bickford Cottages and Unity Point Hospice for their care and efforts. Memorials can be sent to either the Faith United Methodist Church of Gilmore City or the Hartnett-Johnson American Legion of Gilmore City.

The family of Elden "Flick" Lanning created this Life Tributes page to make it easy to share your memories.

Elden “Flick” Lanning, age 89, of Gilmore City passed away on...

Send flowers to the Lanning family.