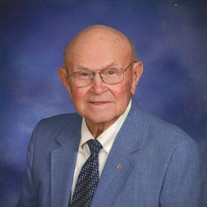 Elden Meyer, age 91 of Ottosen, passed away Saturday, August 21, 2021 at Iowa Methodist Hospital in Des Moines. Funeral Services will be held on Wednesday, August 25, 2021 at 10:00 AM at Peace Lutheran Church in West Bend. Services will be live streamed on the Lentz Funeral Home's Facebook Page. Burial will take place Union Cemetery in Ottosen with Military Honors conducted by West Bend and Ottosen American Legion. Visitation will be held on Tuesday from 4:00 PM until 6:00 PM at Peace Lutheran Church in West Bend. Elden Walter Meyer, the son of Martin and Esther (Licht) Meyer was born on January 7, 1930 at Lotts Creek in rural Kossuth County. On February 2, 1930, was baptized and April 2, 1944 was confirmed at Immanuel Lutheran Church at Lotts Creek. 1944 he moved with his parents to Ottosen where he worked on the farm. In November 1951 he was drafted in the US Army serving nineteen months in Berlin, Germany. Following his discharge in January 1954, he was employed at the Ottosen Elevator for many years and also operated Meyer’s D-X station for several years. On June 29, 1974 he was united in marriage to LaVon Conlon at Peace Lutheran Church in West Bend. In 1980 he was employed by Humboldt County till his retirement in 1995. Since his retirement from Humboldt County, he was employed by Mike Jacobson with farming operations and also employed by the town of Ottosen. Elden was a member of Peace Lutheran Church, having held the offices of President and Elder. He was city clerk of Ottosen for nineteen years. He was a member of the Ottosen American Legion and Ottosen Commercial Club. He loved to golf and raised grapes for many years. Elden is survived by his step-children, Sandra (Mike) Keegan of Dubuque, Judy (Jack) Clarey of Carroll, Pamela (Mike) Sullivan of Cedar Rapids, Jack (Kay) Conlon of Sioux Falls, SD, Patricia Conlon of Cedar Rapids, Mary Marion of Cedar Rapids, Daniel Conlon of Cedar Rapids, Theresa (Ron) Harshbarger of Paullina, Leatha (John) Jack of Independence and Michelle (Lee) Mell of Norway; twenty-one step grandchildren; sixteen great step grandchildren; brother Victor Meyer of Humboldt; sister-in-law, Chris Meyer of Humboldt and sixteen nieces and nephews. He was preceded in death by his wife, LaVon in 1997; step sons Timothy Conlon and Chris Conlon, son-in-law, James Marion; his parents; brothers, Edgar, Paul and Henry Meyer and sisters-in-law, JoAnn Meyer, Lois Meyer and Greta Meyer.

The family of Elden Meyer created this Life Tributes page to make it easy to share your memories.