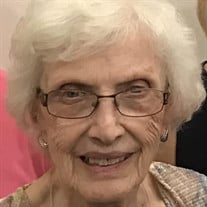 Eleanor Kohlhaas, age 96, of Algona passed away on August 18, 2021 at the Good Samaritan Care Center in Algona. Mass of the Christian Burial will be 10:30 AM on Thursday at the Divine Mercy Catholic Parish - St. Joseph in St. Joseph. Burial will take place in St. Joseph Catholic Cemetery. Visitation will be 4:00 – 7:00 PM Wednesday at the Divine Mercy Catholic Parish - St. Joseph in St. Joseph. Eleanor Anne Loebach, the daughter of Joseph and Elizabeth (Salz) Loebach, was born on July 4, 1925 in Whittemore, Iowa. Eleanor was known as “Ollie” to all native Whittemorians. In 1943, she graduated from Presentation Academy in Whittemore. After high school, Eleanor worked in Mankato, MN as a bookkeeper. On August 20, 1947 Eleanor was united in marriage with Arthur Kohlhaas at St. Michael’s Catholic Church in Whittemore. They farmed near St. Joe and raised 6 children. Shortly after their 25th Wedding Anniversary Arthur died from cancer. Eleanor was a hard working farm wife and mother. She successfully managed the farm operations which allowed for the next generations to continue the family business. In 1981, she moved to Algona and worked as a receptionist / bookkeeper at North Iowa Appliance for years. Eleanor belonged to the CDA of St. Joe and Algona and served on the St. Joseph Parish Council while living on the farm. She enjoyed competitive card games with skilled participants all the while having lively conversation. Eleanor also enjoyed poking fun of herself and members of her close knit groups of friends. She loved her grandchildren as much or more than her children and she cherished her great grandchildren. Left to cherish her memory are her children, Mike (Mary) Kohlhaas of West Bend, Bill (Diane) Kohlhaas of Morton, IL, Tom (Geri) Kohlhaas of Solon, Jane Barton of Ft. Worth, TX and Shelley (Kent) Kohlhaas-Kern of Northlake, TX; 11 grandchildren; 5 step grandchildren; 17 great grandchildren; 8 step great grandchildren; a brother-in-law, Rich Kohlhaas of Algona; a sister-in-law, Darlene Bernhard of Britt; cousins, including Rev. Merle Kollasch; and many nieces and nephews. She was preceded in death by her parents; husband; daughter, Joan Kohlhaas; great granddaughter, Amara Sorensen; a daughter-in-law, Diane Mader Kohlhaas; and siblings, Agnes, Dorothy, Joe, Godfrey, Lenny, Mary Lou and Ruth.

Eleanor Kohlhaas, age 96, of Algona passed away on August 18, 2021 at the Good Samaritan Care Center in Algona. Mass of the Christian Burial will be 10:30 AM on Thursday at the Divine Mercy Catholic Parish - St. Joseph in St. Joseph. Burial... View Obituary & Service Information

The family of Eleanor Kohlhaas created this Life Tributes page to make it easy to share your memories.

Send flowers to the Kohlhaas family.