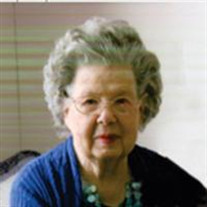 Elizabeth P. Dahlhauser, 101, a former 55 year resident of West Bend died Tuesday July 8, 2014 at Bishop Drumm Retirement Center, Johnston, Iowa. Services will be held Saturday July 12, 10:30 AM at Sts. Peter and Paul's Catholic Church, West Bend with burial to follow in the West Bend Cemetery. Visitation is from 5-7 PM Friday at the church where a CDA rosary will be recited at 4.45PM and a parish vigil held at 6:45 PM. Harris Funeral Home of West Bend is in charge of arrangements. Elizabeth was born March 25, 1913 in Wellsville, MO to Max and Nelle (Johnson) Piper. She grew up in the Mexico, MO area and moved with her family to Tallulah, LA. She graduated from Tallulah High School in 1929. She then attended Louisiana State Normal College (Northwest Louisiana State University) at Natchitoches, LA 1929-1931. After substitute teaching a year she took a position at a one room schoolhouse, Afton School near Tallulah, LA where she taught from 1932 thru 1941. She took classes in the summers from Louisiana State Normal College and received a Bachelors degree in 1941. She then taught at Waverly school, Quimby, LA from 1941-1945. In 1945 she moved to Iowa and married Paul P. Dahlhauser on Sept. 21, 1945 at St. Michael's Catholic Church in Whittemore, IA. They had 5 children. She was a homemaker from 1945 thru 1958. In 1958, she taught at Sts. Peter & Paul's Catholic School in West Bend, IA. In the spring of 1960, she began teaching at St. Michaels School, Whittemore, IA and retired from teaching in 1983 at age 70. After retiring, Elizabeth enjoyed gardening, cooking, reading, crocheting beautiful doilies and afghans, one for each of her grandchildren. She loved playing cards & dominos with family. She especially enjoyed teaching her grandchildren how to play dice. She was a longtime member of the Catholic Daughters of America, Ladies Aid and the American Legion Auxiliary. Elizabeth is survived by her four children, Bill (Jane) Cedar Falls, IA, Jack (Teresa, a special friend) Orlando, FL, Trish (Dave) of Urbandale, IA....David (Peg) Lakewood, CO. She has 14 grandchildren; Sarah (Ryan), Lee (Lisa), Beth (Beth); Christy (Jeff), Nicki (Devon), Michael (Shelley), Joshua, Matt, Mark (April), Jon; Molly (Ben), Jamie (Melissa); Jennifer (Francisco), Andrew (Kristen), 28 great grandchildren, 3 step grandchildren and 7 step great grandchildren. She is also survived by her brother Donald Piper, Bartlett, TN ; her brother-in-laws Art (Peg) Dahlhauser & Marvin (Bernie) Dahlhauser, Moline, IL and many nieces & nephews as well as many friends. She was preceded in death by her husband, Paul; her son, Mike; her parents, 3 brothers and 2 sisters. www.harrisfuneralservice.com

The family of Elizabeth P. Dahlhauser created this Life Tributes page to make it easy to share your memories.

Send flowers to the Dahlhauser family.