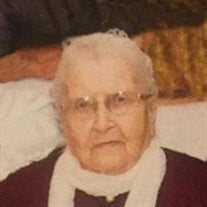 West Bend...Ella Schneider, 95 of West Bend passed away Tuesday, February 27, 2018 at the West Bend Health and Rehab Center.  Services will be held Saturday, March 3, 10:00 AM at the Apostolic Christian Church in West Bend with burial to follow in the church cemetery.  Visitation is from 4-7 PM Friday at the Apostolic Fellowship Center.  Ella Pearl (Thomsen) Schneider was born to Claus and Eva (Trenary) Thomsen on November 10, 1922 at their home near Lake Preston, S.D.  Ella lost her mother at the age of 3 weeks.  She and her 3 brothers and 3 sisters were cared for by their father and Grandma Thomsen until Grandma's death.  For a short time after her mother's death, Ella was sent to live with an aunt and uncle in Sleepy Eye, MN, eventually returning to live with her family in Lake Preston.  In 1934, after the dust bowl years in South Dakota, the family moved to Laurens, IA.  Ella attended  country school in South Dakota and completed her formal education in Laurens.  She was united in marriage to Lawrence Schneider in Wichita Falls, Texas on December 27, 1941. They enjoyed 59 years of married life.  Lawrence was serving in the Army Air Corps during WWII; it was during that time Ella accompanied him to many different Air Corps bases here in the United States until he was sent overseas to Italy.  She returned to West Bend and was joined by Lawrence when the war ended.  The couple lived and farmed near West Bend during their married lives, moving to town in 1980.  Ella enjoyed doing crafts, helping Lawrence finish his woodworking projects, and especially spending time with their grandchildren.  She was a faithful member of the Apostolic Christian Church.  Left to cherish her memory are her children:  Marilyn (Phil) Gardner of Stoughton, WI, Gary (Sue) Schneider of West Bend, IA, Louis (Joni) Schneider of West Bend, IA, David (Laurie) Schneider, of Emmetsburg, IA, and Charles Schneider of West Bend, IA, 15 grandchildren, 25 great grandchildren, 6 step grandchildren and 12 step great grandchildren.  She was preceded in death by her husband, Lawrence in 2001, a son-in-law James H. Merryman, daughter-in-law Christine C. Schneider, brothers: Nicholas, Delbert, Elden, sisters: Mary Thomsen, Ruby Morris and Evelyn Fisher.  www.harris funeralservices.com

West Bend...Ella Schneider, 95 of West Bend passed away Tuesday, February 27, 2018 at the West Bend Health and Rehab Center.  Services will be held Saturday, March 3, 10:00 AM at the Apostolic Christian Church in West Bend with burial to follow... View Obituary & Service Information

The family of Ella Schneider created this Life Tributes page to make it easy to share your memories.

Send flowers to the Schneider family.