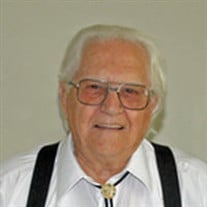 Elwyn B. Christensen, 95, of Gilmore City died Wednesday, October 25, 2017, at his current residence of Arlington Place Assisted Living in Pocahontas, where he had lived the past 7 weeks. For the last 5 months he had suffered from congestive heart failure, and at the end was ready to join his heavenly family. Elwyn Bernard Christensen was born in Garfield Township, Pocahontas County, February 17, 1922, to Arthman and Hilda (Hansen) Christensen. He was raised on the family farm, attended country school and graduated in 1939 from the Gilmore City High School. After graduation, he helped his father on the farm until he joined the US Navy, October 29, 1942, serving as an Aviation Radioman 2nd Class. After his honorable discharge, he returned to the family farm. He married Grace Anderson on September 8, 1948, in Dell Rapids, South Dakota, and to this union 5 children were born. He farmed until his retirement in 1986, when he moved into Gilmore City. EB (Bernard) loved to tell stories and would entertain for hours recounting his experiences over 9 ½ decades. He was a member of the Baptist Church and his faith was an important part of his life. A licensed amateur radio operator for many decades after his military service, he enjoyed talking to other radio operators around the country and beyond. He was a member of the VFW and a regular at The Family Table in Pocahontas, where he enjoyed visiting with the staff and patrons. He loved gardening and enjoyed tinkering and fixing most anything. He loved his family and was especially proud of the accomplishments of his children, grandchildren and great grandchildren. Bernard is survived by children, Merle (Lynne) of Bridgewater, MA; Melvin (Becky) of Chester, SD; Debra (John Roe) of Oklahoma City, OK; and Alan (Debby) of Fairfax, VA; 16 grandchildren and 25 great grandchildren. Preceeding him in death are his parents; sister and brother-in-law, Delma and Charles H Obye; wife, Grace of 57 years, and daughter, Bonnie. Visitation will be Sunday afternoon 3-5 PM at the Harris Funeral Home in Gilmore City. The funeral service will be held at 10 AM Monday, Harris Funeral Home, Gilmore City, with burial to follow in Marble Valley Cemetery.

Elwyn B. Christensen, 95, of Gilmore City died Wednesday, October 25, 2017, at his current residence of Arlington Place Assisted Living in Pocahontas, where he had lived the past 7 weeks. For the last 5 months he had suffered from congestive... View Obituary & Service Information

The family of Elwyn Bernard Christensen created this Life Tributes page to make it easy to share your memories.