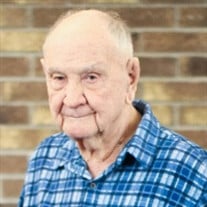 West Bend... Ervin John Banwart, the son of Daniel and Celia (Braker) Banwart was born September 14, 1920 in West Bend where he was raised and attend school through 8th grade.   He married Emelia E. Feucht, August 29, 1943 and to this union... View Obituary & Service Information

The family of Ervin John Banwart created this Life Tributes page to make it easy to share your memories.

Ervin John Banwart, the son of Daniel and Celia...