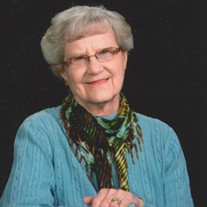 Eunice Meyer, age 87 of Algona, passed away Thursday, March 18, 2021 at the Kossuth Regional Health Center. Funeral services will be held on Saturday, March 27 at 11:00 AM at Trinity Lutheran Church in Algona. Services will be live streamed on the Trinity Lutheran Church’s YouTube page https://youtu.be/roJeohvaY-w. Burial will take place at Burt Township Cemetery. Visitation will be held on Saturday from 9:30 until 10:30 at Trinity Lutheran Church in Algona. Masks are required for all events. Eunice Ann (Wittkopp) Meyer was born on September 24, 1933, in the parsonage at Trinity Lutheran Church, rural Marcus, Iowa where her father was the pastor. She was the 6th child born to Edward L. Wittkopp and Magdelene (Schaefer) Wittkopp. Eunice started school at Amherst #9, a country school a mile from her home. Her oldest sister, Helen, was her 1st grade teacher. At the end of 7th grade, her father accepted a call to Concordia Lutheran Church and they moved to Sioux City, Iowa where she attended West Jr. High and Central High School. In the summer of 1950, Eunice and her parents moved to Burt, Iowa, where her father was the pastor at St. John’s Lutheran Church. Eunice graduated from Burt High School in 1951 and worked as a secretary at that school for 1 year. On September 15, 1952 she was united in marriage to Eugene Paul Meyer and they lived on a farm east of Burt for 58 years raising 3 sons. Eunice was an active member of St. John’s, singing in the choir, teaching Sunday School (the little ones were her favorites), directing VBS, Christmas Programs and Senior Saints. Eunice was also a member of LWML, serving terms as zone president, vice president and secretary and various local offices at both St. John’s and Trinity. She was elected to the board of Lutheran Family Services and was a member of the district Rural Ministries Committee. She also taught classes at Religious Nurture. Eunice and Eugene enjoyed working on 2 Laborers for Christ projects in Mason City and Prior Lake, Minnesota. They also spent a number of winters camping at Trophy Gardens, Alamo, Texas. In 2010 they moved to Algona and became members of Trinity Lutheran Church. She was preceded in death by her parents; her beloved husband, Eugene; 2 brothers, Arno and Otto Wittkopp; 3 sisters, Helen Erickson, Ruth Schoeder and Myra Wittkopp and an infant son, Scott Edward. Left to cherish her memory are her 3 sons, Allan and Julie Meyer of Owatonna, Minnesota, Joel and Kathy Meyer of Fort Collins, Colorado and Rodney and Bonita Meyer of rural Burt; 11 grandchildren, Sarah Perkins, Michael Meyer, Emily Anderson, Karen Goble, Liz Stitzmeyer, Jessica Meyer, Rebecca Meyer, Rachel Meyer, Myra Meyer, Hannah Meyer and Jonathan Meyer and 12 great grandchildren, Isaac, Emma, Elijah and Amos Perkins; Ella and Ruby Anderson; Vivian Annabelle and Luella Stitzmeyer; Haley and Henry Goble; and Kendrick Kraft-Meyer. Donations may be directed to Mission Central – LCMS World Mission, 40718 Highway E 16, Mapleton, Iowa 51034 and Trinity Lutheran Quilters, Trinity Lutheran Church, 520 N. Garfield, Algona, Iowa 50511 in Eunice’s honor. Lentz Funeral Home of Algona is assisting the family. Condolences may be left online at www.lentzfuneralhome.com.

Eunice Meyer, age 87 of Algona, passed away Thursday, March 18, 2021 at the Kossuth Regional Health Center. Funeral services will be held on Saturday, March 27 at 11:00 AM at Trinity Lutheran Church in Algona. Services will be live streamed... View Obituary & Service Information

The family of Eunice Meyer created this Life Tributes page to make it easy to share your memories.