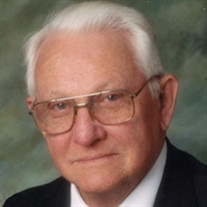 Forrest T. Gilmore Jan. 31, 1925 - Feb. 21, 2019 Funeral services for Forrest T. Gilmore to be held Wednesday, February 27, at 11:00 a.m. at St. Paul's Lutheran Church in Whittemore with Rev. Mark Resner officiating. Visitation will be from 9:30 a.m. to 10:30 a.m. prior to the service. Internment following at St. Paul's Lutheran Cemetery. Forrest Tisue Gilmore, son of Moody and Hattie (Tisue) Gilmore, was born January 31, 1925 in O'Neill NE. He was the youngest of seven children and attended country school near Britt, IA. Forrest was a proud veteran of the US Navy. He attended basic training in Farragut, ID in 1943. He was transferred to San Diego where he was assigned to the USS PA-51 and stationed in the Marshall Islands when Pearl Harbor was invaded. Soon after this, he was transferred back to to San Diego where he was trained as a welder prior to being assigned to the USS LCI-397 Amphibious which later invaded the Peleliu Islands where they patrolled for 9 months prior to returning to Pearl Harbor. He was released from the Navy in 1945. Later in life, he was deeply touched to have attended the Veteran's Honor Flight to Washington DC. Forrest married Mildred (Faulstick) on September 29th, 1946 at Immanuel Lutheran Church in Lotts Creek, IA. They made their home in Whittemore, IA for 30 years where they raised their children Daniel, Connie and Jocelyn. Forrest's occupations included farming, bulldozing, and custom wheat harvesting. He loved to play cards, work on tractors, and spend time with his family. Left to cherish his memory are his children: Daniel and Bobbie Gilmore of Utah, Connie Bonnstetter of Iowa, and Jocelyn and John Krukow of Arizona; eight grandchildren; thirteen great-grandchildren; three step great-grandchildren; two brothers-in-law; and many nieces and nephews. Forrest was preceded in death by his beloved wife Mildred as well as his parents, sisters and their spouses, son-in-law Joe Bonnstetter, and grandson Dirk Gilmore. Harris Funeral Home in charge of arrangements. Online condolences may be left at www.harrisfuneralservices.com.

The family of Forrest T Gilmore created this Life Tributes page to make it easy to share your memories.

Send flowers to the Gilmore family.