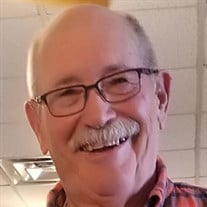 Garry Flaherty, age 81 of Algona, passed away Saturday, December 12, 2020 at the Algona Manor in Algona. Private Family Mass of the Christian Burial will be 2:00 PM on Friday, December 18, 2020 at St. Cecelia Catholic Church in Algona with Rev. Ed Girres and Rev. Mr. Bill Black celebrating. Mass will be live streamed on the Five Saints Catholic Community YouTube page: www.youtube.com/user/stceceliaalgona. Burial will take place at Calvary Cemetery in Algona with Graveside Services live streamed on Lentz Funeral Home's Facebook page https://www.facebook.com/Lentz-Funeral-Home-122511234501273. A Public Visitation will be held 10:00 AM – Noon Friday at Lentz Funeral Home in Algona. Due to the Covid-19 pandemic, only 15 individuals are allowed at a time and masks are required. Garry Lee Flaherty was born on April 13, 1939 in Fort Dodge, Iowa to Walter and Monica (Miller) Flaherty. He was the eldest of eight children and learned a good work ethic at an early age working with sheep, hogs and milking cows. For many years the family was involved with 4H showing sheep and their registered Brown Swains. His education began at a country school near their home and he graduated from Pocahontas Catholic School in 1957. He served with the US Army Military Police for several years. On April 28, 1962 Garry was united in marriage to Carol Wirkus at Sacred Heart Catholic Church in Pocahontas, Iowa. To this union three children were born: Jeff, Nancy and Erin. In 1972 the family moved to St. Joe-Bode where Garry was the custodian at the school and church and drove a school bus for Bishop Garrigan Schools. In 1980 they moved to Algona where he was employed by St. Cecelia Church and Seton School; also driving a school bus for BGHS. He always enjoyed the school kids and had a few second generation families. For many years he worked the concession stands at BGHS during football, volleyball and basketball. After retiring from school he enjoyed helping Dave Loss farm in the spring and fall. Garry was a strong, quiet man who enjoyed fishing, camping, his grandchildren’s activities, his friends and his siblings, He enjoyed concerts of which there were so many over the years. Garry had served on the BGHS music board, the Calvary Cemetery Board and was an active member of the Algona Knights of Columbus Council #952 and the Fourth Degree Knights of Columbus – Monsignor P.P. Gearen Assembly #2610. Garry is survived by his children, Jeff Flaherty of Albertville, MN, Nancy (Terry) Foertsch Brenneman of Ruthven and Erin Thilges of Algona; Grandchildren, Adam (Carisa) Flaherty, Mackenzie (Brent) Huber, Craig (Erica) Flaherty, Sadie (Tim) Foertsch Greenwald, Nicholas Foertsch, Charlie (MyKayla) Thilges and Caitlin Thilges; two step grandchildren, Joelle Brenneman Treschmann and Jill (Jeremy) Brenneman Loria; great-grandchildren, Liam, Cole and Andi Huber and June and Mavis Flaherty; two step great-grandchildren, Madeline and Mason Loria; his siblings, Ray and Linda Rouse, Joe and Diane Condon, Jim and Shiela Roche, Denny and Jan Flaherty, Duane Flaherty and Darrell and Cheri Bethke. Preceding him in death were his parents, Walter and Monica Flaherty; wife, Carol; son-in-law, Mark Foertsch; brother and sister-in-law, Pat and Marlene Flaherty and in-laws, Bernard and Ruth Wirkus.

Garry Flaherty, age 81 of Algona, passed away Saturday, December 12, 2020 at the Algona Manor in Algona. Private Family Mass of the Christian Burial will be 2:00 PM on Friday, December 18, 2020 at St. Cecelia Catholic Church in Algona with Rev.... View Obituary & Service Information

The family of Garry Flaherty created this Life Tributes page to make it easy to share your memories.

Send flowers to the Flaherty family.