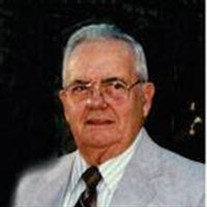 Geoffry L. Landmesser, 81 of Gilmore died Tuesday December 30, 2008 at his home in Gilmore City. Services will be held Sunday, January 4, 2:00 PM at the Faith United Methodist Church, Gilmore City with burial to follow in Marble Valley Cemetery. Visitation is from 1-5 PM Saturday at the Harris Funeral Home in Gilmore City. Geoffry Lee Landmesser, the son of Henry L. Landmesser and Alma Sellis, was born May 30, 1927 in Gilmore City, Iowa. He attended school in Fort Dodge and Humboldt. He enlisted in the US Navy in May of 1944. On July 21, 1950 Geoffry was united in marriage with Doris Gehrt in Omaha, Nebraska. The couple spent years in New Orleans, LA, Mobile, Alabama and Seattle, Washington before returning to Gilmore City in 1963. After 22 years in the service Mr. Landmesser retired in 1965. Survivors include his wife Doris, Gilmore City, daughters: Lana Lewis of Gilmore City and her children Dean Cox, Chad Cox and Aaron Lewis; Metzula (Charles) Ford of Ottosen and their children Timothy J. Wilkinson, Kerry L. Wilkinson and Phillip A. Wilkinson; Glynn Landmesser of Skagway, Alaska; Gennifer (Michael) Scott of Emmetsburg and their children Jeffry Harris and Erika Harris; Pamela (Bill) Anderson of Dakota City and their son Justin Anderson,and 19 great grandchildren. Geoffrey was a member of Faith United Methodist Church, the American Legion of Gilmore City and the VFW in Humboldt. He was a Shriner, Past Master of the Masonic Lodge and served as Mayor of Gilmore City for 14 years. He enjoyed making knives for Gun Shows and attending many Navy and Coast Guard reunions over the years in many areas of the country. Geoffry was preceded in death by his parents and a 1/2 sister Glynn Ellen Landmesser. The family suggests memorials in lieu of flowers. Condolences may be sent to www.harrisfuneralservices.com.

The family of Geoffry Lee Landmesser created this Life Tributes page to make it easy to share your memories.

Send flowers to the Landmesser family.