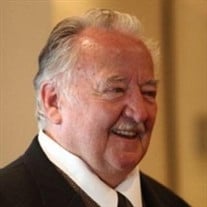 George William Forsythe, 80, died in his sleep in West Bend, Iowa with family close by on February 27, 2019. Family and friends may call at St. Peter and Paul Catholic Church during a wake on Sunday, March 3, 2019 from 1-4pm.  There will be a prayer service at 4 pm followed by a Knights of Columbus rosary.  A funeral mass will be held at the Church on Monday, March 4, 2019 at 10:30 am followed immediately by a graveside service. George was born November 12, 1938 in West Bend to Roy and Regina (Dunn) Forsythe.  He graduated from West Bend High School in 1957.  After high school, George served for seven years in the National Guard. A fixture of West Bend for most of his life, George married Barbara Thul of St. Joseph, Iowa in 1961 and they raised a family of 13 children in West Bend.  They later divorced. George had many jobs but most significant were the West Bend Elevator, owning the family bar business, Forsythe’s Tap, driving the local school bus, and working as a long-haul driver for Warren Transport.  He loved to be in the know and was always ready to share a story or to hear a new one. He loved and was very proud of his family, particularly his active grandchildren and great-grandchildren who knew him as Papa Georgio, a nickname that his grandsons Dustin and Christopher came up with.  George spent many a Sunday afternoon working the phones to find out about his families’ activities and accomplishments. George is survived by 12 children Gary (Bettina) Forsythe of West Bend, Iowa, David (Joni) Forsythe of Herndon, Virginia, Julie (Andrew) Aldaz of Grand Canyon, Arizona, Kathryn (Matthew) Cheney of Rockford, Michigan, Debra Gibson of Queen Creek, Arizona, Mary Gearhart (Ed Montag) of West Bend, Iowa, Janet (Timothy) Nihill of Chandler, Arizona, Jill (Thomas) Kinney of Owego, New York, Joni Villagomez of American Fork, Utah, Gina (James) Spotten of Chandler, Arizona,  Diane (Travis) Sanders of San Tan Valley, Arizona, and Mark (Heather) Forsythe of Whittemore, Iowa; 34 grandchildren and 9 great grandchildren; siblings Roy (Carol) Forsythe of Naperville, Illinois, Ray (Donna) Forsythe of Fort Dodge, Iowa, Colleen Kollasch of Osseo, Minnesota, Shirley Goldtrap of Spencer, Iowa, and his twin sister Georgean Hadley of Newport, NC; along with many nieces and nephews.  George was preceded in death by his parents Roy and Regina Forsythe, son Robert Forsythe, grandson Christopher Gearhart, son-in-law Glenn Gearhart and brothers James and Robert.

George William Forsythe, 80, died in his sleep in West Bend, Iowa with family close by on February 27, 2019. Family and friends may call at St. Peter and Paul Catholic Church during a wake on Sunday, March 3, 2019 from 1-4pm.  There will be... View Obituary & Service Information

The family of George William Forsythe created this Life Tributes page to make it easy to share your memories.

George William Forsythe, 80, died in his sleep in West Bend,...

Send flowers to the Forsythe family.