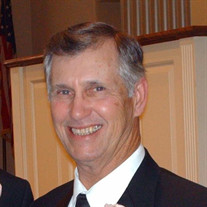 Gerald “Jerry” Camp, age 73, passed away Friday January 22, 2021, at Capital Regional Medical Center in Tallahassee, Florida. Viewing and visitation will be at Lentz Funeral Home in Algona on Saturday, January 30th at 10 am. The funeral service will follow at 10:30 am with burial in East Lawn Cemetery. Military rites will be conducted by the Iowa Army National Guard Honor Guard. Services will be live streamed on the Lentz Funeral Home FaceBook page. https://www.facebook.com/Lentz-Funeral-Home-122511234501273 Gerald Francis Camp, the eldest son of James Alfred and Lois Marguerite (Gardner) Camp, was born July 2, 1947 in Algona, Iowa. He graduated from Algona High School in 1965. Gerald served in the U.S. Army as a clerk overseas during the Vietnam War. He was awarded the Bronze Star Medal and the Army Commendation Medal for his service. He was honorably discharged in 1969. On July 2, 1974 he married Kristy Kent of Algona. They had three sons together and later divorced. In 1996, he moved to south Florida to be near his sons and worked as a truck driver for C.R. England and then later for Southeastern Milk. Gerald had a reputation for being a hard worker who would help anyone in need. He was a devoted father, grandfather, and Christian. Left to cherish Gerald’s memory are his sons, Chad Camp (wife Jennifer) of Tallahassee, Florida, Benjamin Camp of Alexandria, Virginia, and Timothy Camp (wife Sissy) of Asheville, North Carolina; and his grandsons Tommy and Aidan . He is also survived by his siblings Donald, Donna, Mary, and Curtis. Gerald is preceded in death by his parents and his brothers, David and Alan. The family requests donations be made to the Bible Broadcasting Network in leu of sending flowers.

Gerald &#8220;Jerry&#8221; Camp, age 73, passed away Friday January 22, 2021, at Capital Regional Medical Center in Tallahassee, Florida. Viewing and visitation will be at Lentz Funeral Home in Algona on Saturday, January 30th at 10 am. The... View Obituary & Service Information

The family of Gerald Camp created this Life Tributes page to make it easy to share your memories.

Send flowers to the Camp family.