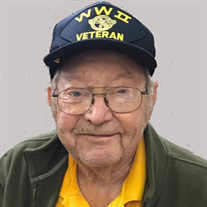 Gerald “Jerry” Johnson, age 99, of Havelock, passed away on October 1, 2021 at the Arlington Place in Pocahontas. Funeral services will be 10:00 am on Friday at Trinity Lutheran Church in Mallard. Burial will be in the Washington Cemetery of Havelock, with military rites conducted by the Iowa Army National Guard Honor Guard, the Havelock AmVets Post # 49 and the Anderson-Eckert-Hersom American Legion Post #345 of Mallard. Visitation will be 4:00 – 7:00 PM Thursday at the church. Jerry’s service will be Live Streamed on the Lentz Funeral Home FaceBook page. Gerald Eugene “Jerry” Johnson, son of Frank and Emma (Froh) Johnson, was born on October 16, 1921 on the homestead outside Havelock, Iowa. He graduated from Mallard Community School in 1940 and married his high school sweetheart, Dorothy Stokes in 1942 at the Johnson house. He soon went on to serve in the Army-Air Corp Bomber Unit as a Sergeant, based in Washington State followed by Tampa, FL where he and Dorothy met many lifelong WW2 friends they would visit multiple times a year until their passing. Upon completion of the service, Gerald and Dorothy returned to then 3 generation family farm (founded 1896) to take over the farming and custom shelling business started by his Grandfather Samuel (Ida) Johnson and carried on by father Frank (Emma) Johnson. As Frank and Emma occupied the main house, a tiny schoolhouse dubbed “the little house” was added to the property and Gerald and Dorothy moved in and made it their home until Frank (Elsie, his 2nd wife after Emma’s passing) retired and moved to Pasadena, California. The “little house” would become an amazing playhouse for the kids to come after Dorothy and Gerald moved into the main house. Speaking of kids…Gerald and Dorothy longed to start a family. And as God always has a plan, they adopted 4, (yes, FOUR!), children to the Johnson clan, launching the 4th generation! First off came Larry George, followed by Donna Jean, cruising in was Jimmy Eugene, with an unexpected but delightful addition of Jill Charlotte. Gerald and Dorothy immersed themselves through many organizations and events. They were active members of the Mallard Trinity Lutheran Church, where Dad was an elder, choir director, bible study leader, Laymen’s League member and everything in-between. Outside of church, Gerald was a member of the Amvets in Havelock, the American Legion in Havelock and Mallard, Mallard Country Club, Mallard Community School Board (9 years), multiple Mallard and Havelock Centennial Committies, town softball teams. Jerry finally retired in 1986 and continued to stay very active in the community, church and visiting friends and family near and far. Gerald is preceded in death by his wife Dorothy, parents Frank and Emma, and brother Lawrence (Helen). He is survived by his children, Larry, Donna (Mike), Jimmy and Jill; grandchildren Raymond and Tanya (Chris) and great grandson Asher; followed by multiple nieces, nephews (incl. great, great great) and dear siblings, Barbara and Sam (Helen) and numerous other relatives. We will remember Dad as a Leader, Storyteller (we were glued to the stories of past times), Teacher, Hero, Connector, Organizer (there wasn’t a centennial, event, family reunion that Dad shied away from), Cheerleader (Go Ducks Go could be heard a mile away), Traveler (we saw most of the US through draped windows of a Volkswagen van. We went through 3 of them, and our parents were no-where near hippy status), Singer (that voice was bigggg!) and a Christian (Dad loved the Lord). God be with you til we meet again… In lieu of flowers, gifts will be distributed by the family to the Mallard Trinity Lutheran Church and Havelock Amvets Post 39 at: The Johnson Family, 20553 410th St., Havelock, Iowa 50546.

Gerald &#8220;Jerry&#8221; Johnson, age 99, of Havelock, passed away on October 1, 2021 at the Arlington Place in Pocahontas. Funeral services will be 10:00 am on Friday at Trinity Lutheran Church in Mallard. Burial will be in the Washington... View Obituary & Service Information

The family of Gerald "Jerry" Johnson created this Life Tributes page to make it easy to share your memories.

Gerald “Jerry” Johnson, age 99, of Havelock, passed away on October...

Send flowers to the Johnson family.