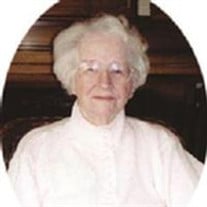 Gesina Wilhelmina Leontine Schutter Munson, died Thursday November 13, 2014 at the West Bend Care Center. Services will be held Monday, 10:00 AM at the Harris Funeral Home Chapel in West Bend with burial to follow in the West Bend Cemetery. Visitation is from 5-7 PM Sunday at the funeral home in West Bend. Gesina Schutter was born October 22,1911 at Riceville, IA to Jerry and Minnie (Heetland) Schutter where she was baptized. As an infant she moved with her parents to West Bend where she was confirmed in the First United Presbyterian Church. In 1930 Gesina graduated from the West Bend High School and then earned a Bachelor of Arts Degree From Coe College. She then taught upper elementary departmental English and social studies at Halfa-Armstong, Goldfield and Wesley, Iowa. Gesina was united in marriage with Martin Clifford Munson April 23, 1938. A few years later the couple moved to West Bend where Gesina taught Sunday School, sang in the choir, was the church pianist, Clerk of Session, and held offices for the United Presbyterian Women and Rodman mariners. In May of 1955, she and Cliff were delegates to the General Assembly of the United Presbyterian Church held in Los Angeles, CA. She transferred her membership to the Methodist Church where she was active in the United Methodist Women and Bible Studies as long as her health allowed. She was a Cub Scout Den Mother, brownie and Girl Scout leader, Band Mother for all four children, taught piano lessons and invited at least one 6th grade class into her home to watch herb Hakes' Iowa History lessons on TV from Ames. She was a member of the Ladies Social Literary Club for 49 years, District officer of Republican Women, Unicef Chairwoman for over 21 years, charter member of the West Bend Historial Society, pianist and officer in the Legion Auxiliary, a volunteer in the Luaback Literacy program and volunteer pianist at the West Bend Care Center for 25 years. In the late 1960's Gesina renewed her teaching certificate at Mankato State College and earned the Reading Endorsement form U.S.D., Vermillion, South Dakota. She then did substitute teaching and taught Remedial Reading in West Bend. Gesina was an avid reader and walker. She enjoyed traveling to visit family and historical places, and attending the Community Concert series. She was preceded I death by her husband Clifford, son Philip, daughter in law Jeanie, her parents and her brothers John, David an Richard Schutter. Survivors include her sons Jerry and Paul (Janet) and daughter Joyce, eight grandchildren, five great grandchildren and one great great grandchild. wwwlharrisfuneralservices.com

The family of Gesina Munson created this Life Tributes page to make it easy to share your memories.

Send flowers to the Munson family.