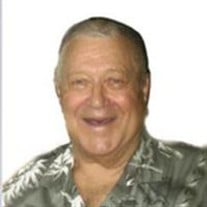 Glen "Jelly Belly" Alderson, 80 of West Bend died Monday January 27, 2014 in Mason City, Iowa. Services will be held Friday, 10:00 AM at Peace Lutheran Church, West Bend with burial to follow in the West Bend Cemetery. Visitation is from 4-7 PM Thursday at the Harris Funeral Home in West Bend. Glen Dean Alderson, the son of Harvey B. and Nellie M. (Myer) Alderson was born March 15,1933 in Cylinder, Iowa where he was raised and received his education, graduating from the Cylinder High School. On October 15, 1960 he was united in marriage with Leona May Schafer in West Bend. After their marriage the couple made their home in West Bend. Glen was owner and operator of Glen Alderson Trucking for 58 years, retiring in 2010. He enjoyed working in his shed, sharing truck driving stories with his buddies, farming and attending Nascar races as well as listening to gospel music. The past few years he became quite a cook, when his sweetheart Leona, became a resident of the West Bend Care Center. Survivors include his wife Leona "Onie", of West Bend, Sons, David (Laura) Ellison of Elkhorn, Wisconsin, and Glen Dean Jr.(Char) Alderson of Brandon, South Dakota, special adopted daughters Patti Runchey and Janet Laubenthal of West Bend, IA, and grandson Shawn Ellison of Shawnee Mission, Kansas. He was preceded in death by his parents, and brothers Loren, Erivn and Wayne. online condolences to www.harrisfuneralservices.com

The family of Glen "Jelly Belly" Alderson created this Life Tributes page to make it easy to share your memories.