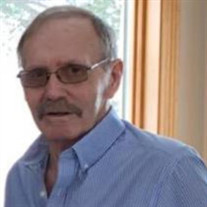 Glen Keehn, age 70 of Algona, passed away Friday, November 19, 2021 at the Kossuth Regional Health Center in Algona. Funeral services will be held on Wednesday, November 24, 2021 at 11:00 AM at First United Methodist Church in Algona. Services will be live streamed on First United Methodist Church’s Facebook Page https://www.facebook.com/AlgonaFirstUnitedMethodistChurch/ Visitation will be held on Wednesday from 9:00 AM until the time of the service at 11:00 AM at First United Methodist Church in Algona. Lentz Funeral Home of Algona is assisting the family. Online condolences may be left at www.lentzfuneralhome.com Glen Albert Keehn, the son of Willis and Eleanor (Grabbe) Keehn, was born on May 5, 1951 in Hampton, Iowa. Glen was the class president of his graduating class of 1969 from CAL Latimer High School. During high school he was active in FFA, showed cattle at the Iowa State Fair and was a member of the marching and swing bands. On April 22, 1978, Glen was united in marriage to Joan Carlson at the Presbyterian Church in Algona. Glen was a feed mill worker at the Hobarton, Irvington and Whittemore Elevators for many years. He worked part time at the Hy-Vee liquor store in Algona until he retired in 2008. Glen loved to fish and hunt in his earlier years. He was an animal lover who would bring home all the strays in need of a loving home. Glen raised chickens and large vegetable gardens. He loved feeding and watching the birds at his many feeders. Glen played chess and was an avid reader. Glen’s dry sense of humor made him the funniest guy he knew. He was the most attentive husband, father, and grandfather and will be dearly missed by all who knew him. Left to cherish Glen’s memory are his wife of 43 years, Joan of Algona; daughters and four grandchildren, Jessica (Joseph) Chapman and Jones Chapman of Polk City and Kristin (Cole Marlow) Pearson and Kiley, Kadence and Kayne Pearson of Burt; brothers, Gary (Diana) Keehn of Alexander, Steve (Nancy) Keehn of Hampton and Mike (Sara) Keehn of Latimer; brothers-in-law, Tom (Joyce) Carlson of Humboldt, Denny (Lynn) Carlson of Algona and Steve (Tricia) Carlson of Algona. Glen is also survived by many nieces and nephews and great-nieces and great-nephews. He was preceded in death by his parents, Willis and Eleanor Keehn; father and mother-in-law, Oliver S. and Betty Carlson and a brother-in-law, William “Bill” Carlson.

Glen Keehn, age 70 of Algona, passed away Friday, November 19, 2021 at the Kossuth Regional Health Center in Algona. Funeral services will be held on Wednesday, November 24, 2021 at 11:00 AM at First United Methodist Church in Algona. Services... View Obituary & Service Information

The family of Glen Keehn created this Life Tributes page to make it easy to share your memories.

Send flowers to the Keehn family.